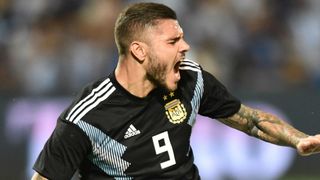 Mauro Icardi is hopeful Lionel Messi will return to the Argentina scene again ahead of next year's Copa America.

Messi has not played for his country since their last-16 exit from the World Cup at the hands of eventual winners France and his international future remains unclear.

They have lost just one of those six matches under the stewardship of interim coach Lionel Scaloni, with Icardi on the scoresheet for the first time as Argentina claimed a second successive 2-0 win over Mexico on Tuesday.

Asked about Messi after the game, Icardi told TyC Sports: "He's the best player in the world and we all hope he comes back with us, especially with the Copa America coming up."

The Inter striker also hailed the team spirit under Scaloni, who does not expect his impressive results to earn him the role on a full-time basis.

"I'd lacked a goal, I was waiting for it and now I'm happy," Icardi added. "It's not easy to go without scoring. It creates a lot of chatter, but now I hope to keep going like this.

"We're a really great group, we can grow a lot and we're happy with the work of Leo [Scaloni], Walter [Samuel] and Pablo [Aimar].

"Of course, it'll be the federation which decides their future but I can say that right now, there's an atmosphere in the national team like never before

"Now we all feel comfortable and something very important is being built. I'd worked under the previous management, but I've never seen the friendship and union that exists between us now."