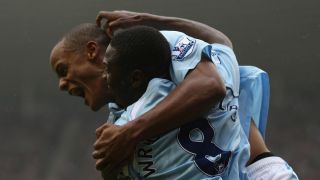 The next big-name arrival has rarely been far away since the Brazilian's £32.5million arrival from Real Madrid, irrespective of whether Mark Hughes, Roberto Mancini, Manuel Pellegrini or Pep Guardiola was at the helm.

But transforming a group of mid-table makeweights into City's current incarnation of a record-breaking winning machine has not been an overnight process devoid of mis-steps. Here we look at six staging posts in the team's evolution.

The sight of Shaun Wright-Phillips marking his second debut with a game-sealing brace represented the stuff of wildest dreams for Manchester City supporters –  a day before those parameters would move for ever. There were high hopes for Wright-Phillips' fellow academy products Stephen Ireland and Michael Johnson but the only player from the team against Sunderland who would endure during the Abu Dhabi era was a certain fresh-faced defensive midfielder named Vincent Kompany.

After two transfer windows of hasty reshaping under Mark Hughes, City began the 2009-10 as an altogether more imposing outfit and flew out of the blocks with four consecutive wins. Gareth Barry and Carlos Tevez, debutants at Blackburn, would become Premier League champions with their new club but too many of Hughes' buys – opening goalscorer Emmanuel Adebayor, for example – were erratic performers. Mixed results on the field and in terms of recruitment saw the Welshman out of a job midway through the campaign.

A knife-edge title race comeback and Sergio Aguero's final day heroics were the best part of seven months away, but City's 6-1 romp in their neighbours' backyard marked the first time they could genuinely be thought of as the best team in England.  Mario Balotelli put a bathroom fireworks mishap behind him to actually perform as a grown-up centre forward, while David Silva - the golden thread connecting all of City's finest displays since his 2010 arrival from Valencia - knitted everything together as United collapsed entirely in the wake of Jonny Evans' red card. Roberto Mancini's tenure was not short on watershed moments. None were more emphatic than this.

As their number-one choice got on with a new challenge in Munich, City chiefs Ferran Soriano and Txiki Begiristain charged Mancini's successor Manuel Pellegrini with introducing extra attacking brio to City's style. The transfer record during the Chilean's reign was patchy and left a cumbersome legacy, while his sides lacked the structural stability Mancini and Guardiola's contrasting approaches instilled. But Pellegrini's City in full flight – spearheaded, as they were in this nine-goal thriller, by Aguero's briefly lethal partnership with Alvaro Negredo – were an anarchic delight.

The mixed bag of Guardiola's initial months in charge reached a chaotic low point as still-reigning Premier League champions Leicester City made merry before shipping a couple of late consolations. "What is tackles?" the Catalan snapped back during his post-match grilling but, more pertinently, what was the formation? A combination of Mancini-era stalwarts, Pellegrini deadwood and his own market mis-steps were lost and ill-equipped to deal with their coach's demands. A similar ordeal followed at Everton a month later and it is to Guardiola's credit that he bullishly stuck to his guns.

A year on from the Leicester debacle, the pieces had fallen into place and the Guardiola machine was irresistibly well-oiled. Driven forward by Kevin De Bruyne, who netted a breath-taking solo effort against Spurs, and bolstered by Raheem Sterling's burgeoning taste for goalscoring, City had a hand on the title before Christmas. Kyle Walker shone against his old employers as a long overdue upgrade at full-back, while goalkeeper Ederson turned in a virtuoso passing display.

On the other hand, Ilkay Gundogan opening the scoring and deputising ably for David Silva as a makeshift combination of Eliaquim Mangala and Fabian Delph held firm on the left-hand side of defence showed how effectively Guardiola had embedded his ideas throughout the squad. This was a triumph that owed as much to the training field as it did the chequebook.