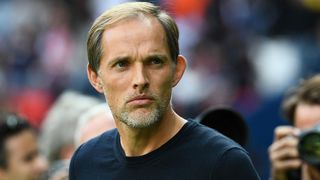 The champions made it three wins from three in Ligue 1 this season thanks to goals from Edinson Cavani, Kylian Mbappe and Neymar at Parc des Princes.

Thomas Mangani's spot-kick had ensured the visitors deservedly went into half-time at 1-1, with PSG's 3-4-1-2 system leaving them looking far too exposed to the counter-attack.

Tuchel reacted at the break by taking off debutant Thilo Kehrer, who conceded the penalty, and switching back to more of a 4-3-3 set-up.

The change made PSG look far more comfortable and they could have added to the goals scored by Mbappe and Neymar, and Marquinhos was keen to credit the coach for his willingness to adapt his tactics.

"The tactical change changed everything in the match," he told Canal Plus.

"Angers were able to get at us in the first half. There was too much space in the middle, the team was a little spread out.

"In the first half, they defended as a block and it was difficult to find spaces. We managed to take the 1-1 into half-time, the coach made some good tactical changes and it gave us more security at the back and in the middle.

"You have to have confidence in the coach, in his philosophy. His first tactic didn't work, he managed to change it by modifying things. He is very intelligent, he sees things very quickly."