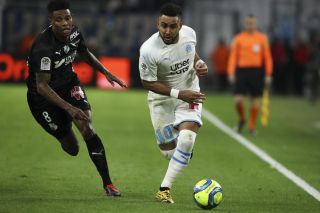 Marseille were stunned by a late Amiens double to drop Ligue 1 points in a 2-2 draw at the Orange Velodrome.

Second-placed Marseille, who are now 12 points behind runaway leaders Paris St Germain, seemed to be cruising when Morgan Sanson and Dimitri Payet scored either side of half-time.

Relegation-threatened Amiens frustrated Andre Villas-Boas’ side during a first half in which Guirassy had the best early opening.

But Marseille took the lead in first-half stoppage time when Amiens goalkeeper Regis Gurtner allowed Sanson’s drive from the edge of the box to evade his grasp.

Payet was out-of-sorts in the first period but he sliced through the Amiens defence after 57 minutes, just moments after Guirassy had a close-range effort disallowed for offside.

The France forward’s ninth goal of the season arrived with a cruel deflection off Aurelien Chedjou.

Amiens kept pushing, however, and Guirassy won and converted a penalty before heading against the crossbar two minutes later.

Marseille looked as if they would hold on for a fifth win in six league games until Ghoddos pounced from close range with virtually the last kick of the match.

Valencia drew 1-1 at Alaves to miss out on a top-six spot in Spain’s LaLiga.

Los Che might have been given a penalty after 25 minutes when Alaves goalkeeper Fernando Pachecho appeared to bring down Denis Cheryshev.

But Daniel Parejo put Valencia ahead with a brilliant 34th-minute free-kick.

Alaves pressed for an equaliser after the break and were rewarded when Edgar Mendez punished sloppy Valencia defending after 73 minutes.

In Germany, Cologne piled the misery on the Bundesliga’s bottom club Paderborn with a 2-1 away win.

Paderborn, with only one point from five games, went close in the early stages through Dennis Srbeny.

But Cologne took a 28th-minute lead when Mark Uth flicked on Florian Kainz’s corner and Jorge Mere slid home at the far post.

Paderborn halved the deficit when Srbeny headed home Kai Proger’s cross after 73 minutes, but impressive Cologne held on for an eighth win in 10 games.