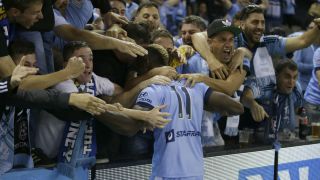 A-League leaders Sydney FC opened an 11-point gap at the summit by coming from behind to secure a 2-1 win over second-place Melbourne Victory, who finished the match with 10 men.

The triumph extends Sydney's unbeaten A-League run to 18 matches in total - 17 this season - and provides a huge boost to their hopes of winning the Premiers' Plate for the first time since 2010.

Victory went ahead in the 18th minute at Etihad Stadium when Troisi guided a cool shot from Marco Rojas' cushioned pass beyond Danny Vukovic.

Melbourne goalkeeper Lawrence Thomas made an impressive double save to keep out Bobo and Michael Zullo, but Holosko headed home from the resultant corner seven minutes before the break.

Ibini-Isei replaced Holosko and made his mark just four minutes later, holding off Alan Baro before beating Leigh Broxham to fire home the decisive goal in the 65th minute.

FULL TIME | move ELEVEN points clear at the top of the table. Who can catch them now? January 26, 2017