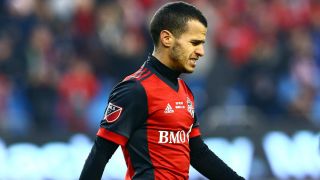 Toronto have been flying high in the CONCACAF Champions League, where they are set to meet Mexican giants America in the semi-finals, but the MLS titleholders have struggled domestically.

And Toronto are still searching for their first win of the MLS season after Jeisson Vargas' deflected shot four minutes before half-time lifted the Impact to victory number one in 2018.

Toronto are rooted to the bottom of the Eastern Conference standings, along with Chicago Fire, who lost 2-1 at Minnesota United.

Atlanta made the most of their numerical advantage as they eased past the Whitecaps 4-1.

Playing in front of 45,000 fans in Atlanta, the hosts crushed Vancouver thanks to Kendall Watson's 13th-minute red card and Josef Martinez's hat-trick.

Watson was dismissed for a foul on Leandro Gonzalez Pirez following a video review and Martinez converted the subsequent penalty.

It was one-way traffic from that point as Aaron Maund scored an own goal in the 58th minute before Martinez added a third on the hour-mark.

Substitute Erik Hurtado managed to pull a goal back for the visitors but Martinez completed his hat-trick with two minutes remaining after heading past Stefan Marinovic.

Atlanta are third in the east and three points behind unbeaten New York City, who made it three wins from as many matches thanks to their 2-0 victory over Orlando City.

After a scoreless first half, Ismael Tajouri and Maximiliano Moralez were on target to break Orlando's stubborn resistance at Yankee Stadium.