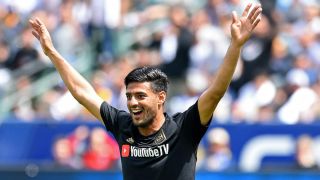 Los Angeles FC and Houston Dynamo scored five goals on a high-scoring day in MLS, while Zlatan Ibrahimovic and LA Galaxy were upstaged by Atlanta United.

LAFC rallied to a 5-3 victory over 10-man Montreal Impact, having trailed 3-1 at half-time away from home on Saturday.

The visitors from Los Angeles were staring at their third defeat in four games after Ignacio Piatti's first-half hat-trick put the Impact in control.

But Laurent Ciman's stunning free-kick against his former team before the half-hour and a red card to Jukka Raitala gave LAFC a glimmer of hope heading into the second 45 minutes.

And LAFC scored four unanswered goals following the interval courtesy of Benny Feilhaber, an own goal, Carlos Vela and Latif Blessing to condemn Montreal to their third successive loss.

LAFC moved up to second in the Western Conference with the win, five points behind leaders Sporting Kansas City and level with FC Dallas, who accounted for Philadelphia Union 2-0.

The Dynamo also produced a five-star display as they routed reigning MLS champions Toronto 5-1 in Houston.

Romell Quioto scored twice and added two assists against Toronto, who were without their star players as they prepare for Wednesday's second leg of the CONCACAF Champions League final against Guadalajara.

Ibrahimovic and the Galaxy walked away emptyhanded after losing 2-0 at home to Atlanta in California.

Former Manchester United forward Ibrahimovic scored the winner last week but the 36-year-old was unable to stop red-hot Atlanta, who were inspired by Josef Martinez and Miguel Almiron.

Atlanta are only a point adrift of Eastern Conference leaders New York City, while Orlando City are third following their 3-2 win over San Jose Earthquakes.