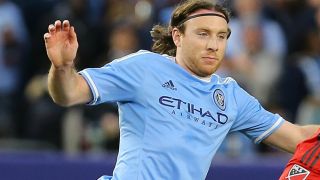 A stunning second-half strike from Thomas McNamara sealed the points after Fanendo Adi had cancelled out David Villa's opener in Portland.

The third consecutive win moved New York to 16 points from 11 games in the east, equal with the Impact, who sit top courtesy of a superior goal difference.

Villa opened the scoring in the 12th minute following Robert Allen's superb throughball, although there was a clear handball in the build-up which was missed by the match officials.

The Timbers dominated play from then on but several brilliant saves from New York goalkeeper Josh Saunders kept the visitors in the lead, up until the 55th minute.

Adi was peppering the New York goal and finally found the breakthrough to slot the ball past Saunders to level the game 10 minutes into the second half.

However, against the run of play, McNamara's curling effort from just outside the area in the 65th minute proved the difference in the end at Providence Park, despite some late pressure from Portland, who crashed to a third successive defeat.

A Jimmy Medranda own goal gave Orlando the lead in the 67th minute but Dominic Dwyer struck back for Sporting KC with a near-post header seven minutes later.

Houston Dynamo secured just their third win of the season courtesy of a 1-0 triumph at home to Real Salt Lake.

The clash was originally scheduled for Saturday but inclement weather conditions saw the game pushed back 24 hours.

Having had the better of the play throughout the match, Houston finally broke the deadlock in the 65th minute via Giles Barnes.

Barnes outran RSL defender Tony Beltran down the left and squeezed a right-foot shot past keeper Jeff Attinella for what proved to be the match-winner.

Despite the three points, Houston remain rooted to the bottom of the Western Conference standings, one point behind Portland, while RSL are sixth.