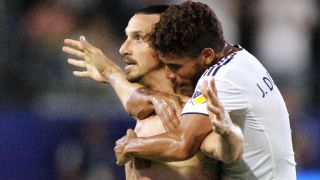 Ibrahimovic netted a brace as the Galaxy boosted their post-season hopes with a 3-0 victory over Vancouver Whitecaps on Saturday.

The 36-year-old striker scored in the 3-0 win against Seattle Sounders last time out and he was at it again with a pair of goals at Stubhub Center.

Ibrahimovic broke the deadlock via the penalty spot in the fourth minute after Romain Alessandrini was fouled inside the area.

The Swedish great doubled the lead approaching the hour-mark with a thunderous effort – his 20th of the season – before earning a penalty, which Alessandrini converted with 13 minutes remaining.

Saturday's win moved Galaxy within a point of sixth-placed Real Salt Lake in the Western Conference, while the Whitecaps are four points back.

Ex-United captain Rooney was at the double as DC demolished Montreal Impact 5-0 to close within two points of the play-off spots in the Eastern Conference.

DC were dominant thanks to Rooney, who scored twice in the second half and added an assist against the Impact.

After firing past Evan Bush in the 48th minute, Rooney scored from 40 yards following a failed clearance from the Impact keeper eight minutes from the end.

Dallas were held to a 0-0 by Portland Timbers, while Columbus Crew and Philadelphia Union drew by the same scoreline.