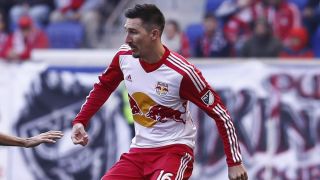 New York Red Bulls are two points off the top of the Eastern Conference after defeating Montreal Impact 3-1 on Saturday.

Montreal took the lead after 21 minutes through Luciano Piatti, who scored his 13th goal of the season, before the Red Bulls equalised a minute later through Wright-Phillips.

He added another in the 41st minute, before Davis effectively sealed the three points in the 46th, taking full advantage of New York City’s 3-3 draw with Columbus Crew.

David Villa gave City a 3-2 lead in the 92nd minute, converting from the spot for his 15th goal of the season, before Ethan Finlay scored his second in the 95th minute to snatch the draw.

Colorado Rapids were unable to close the gap to the top of the Western Conference after their 1-1 draw away to Los Angeles Galaxy at the Stub Hub Center.

Taking the the lead in the 51st minute through Shkelzen Gashi, the Rapids' lead only lasted for 15 minutes, with Steven Gerrard assisting for Daniel Steres.

It meant FC Dallas maintained their four-point lead over Colorado, following their 2-2 draw at home to Sporting Kansas City.

Maximiliano Urruti scored in the 76th minute to cap a flurry of four goals in ten minutes and salvage a point for Dallas.

Dominic Dwyer bagged a five-minute double to put KC up 2-1, after Tesho Akindele opened the scoring with his sixth goal of the year, in the 66th minute.

D.C. United moved into the Eastern Conference play-off spots after their 2-0 win over the Portland Timbers in the oppressive heat at RFK Stadium.

The home side took the lead after a mere seven minutes from a Lloyd Sam corner, with Birnbaum lashing home Bobby Boswell’s flick-on.

Portland hit the frame of the goal in the 26th minute, before Luciano Acosta doubled the margin three minutes later, finding a pocket of space and calmly finishing past Timbers goalkeeper Jake Gleeson.

The win put D.C. a solitary point ahead of New England Revolution, who were handed a 4-0 thrashing away to Philadelphia Union in the other match of the day, and fell out of the post-season placings.