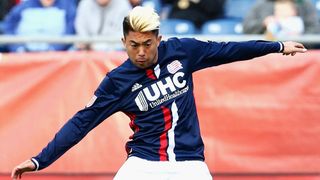 Supporters' Shield leaders Toronto FC crashed to back-to-back defeats, while Chicago Fire were cooled by Philadelphia Union and New York City were held to a draw.

Stunned 5-3 by Montreal Impact midweek, Toronto were unable to return to winning ways, shocked 2-1 at New England Revolution as they were denied their first Shield in MLS on Saturday.

Without star duo Sebastian Giovinco and Jozy Altidore again, Eastern Conference leaders Toronto fell behind in the 82nd minute after Revs substitute Lee Nguyen gave the hosts the lead when his shot deflected off Drew Moor and past Toronto goalkeeper Clint Irwin.

Toronto responded within two minutes via Nicolas Hasler but the Revs had the final say after Kei Kamara headed home the winner in the 87th minute.

The high-flying Canadian outfit had the chance to seal the Shield following second-placed New York City's 1-1 draw at home to Houston Dynamo.

Toronto are 10 points clear of New York City atop the east, while the Fire are four points further back after their 3-1 loss to the Union.

Once on pace for the Shield, Bastian Schweinsteiger and the Fire have struggled for consistency and momentum, and that continued against the resurgent Union, who snapped a streak of three successive draws courtesy of a Chris Pontius brace.

Vancouver Whitecaps extended their lead atop the Western Conference with a 2-1 win over Colorado Rapids.

The Whitecaps are four points clear of three other teams, including reigning MLS Cup champions Seattle Sounders, who went down 2-0 to Real Salt Lake.