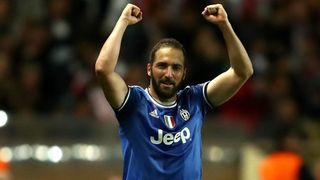 Gonzalo Higuain ended his woe in the Champions League knockout stages with a crucial double as Juventus recorded a 2-0 away win over Monaco to take full control of their semi-final tie.

Juve striker Higuain came into the match having only netted twice in his last 24 knockout games in the competition, but banished his reputation as a player who does not shine in big games by scoring the same amount in a single match at Stade Louis II.

The Argentina international scored with a first-time finish in each half, the impressive Dani Alves creating both goals to take the sting out of Monaco, who had started strongly.

After keeping out a Monaco side who had scored 12 goals in the knockout stages this season, Juve's rock-solid defence have now conceded just twice in 11 Champions League games this season.

And Massimiliano Allegri's men are now strong favourites to reach what would be their second final in three years when the two teams meet for the second leg in Turin next Tuesday.

Real Madrid are the likely opponents for the winners of this tie in Cardiff after defeating Atletico Madrid 3-0 in the first leg of their semi-final.

7 - Gonzalo Higuaín has now ended a seven-game goalscoring drought in the CL knockout-out phases. Relief. May 3, 2017

2 - Dani Alves has provided two assists in a Champions League game for the first time in his career. Precious. May 3, 2017

Juve had more of the early possession but it was Monaco, led by star man Kylian Mbappe, who threatened first with two good opportunities.

First, Mbappe could only send a free header straight at Gianluigi Buffon, before the Italy goalkeeper – making his 100th Champions League appearance for Juve – had to beat away a close-range volley from the teenager, both chances created by Nabil Dirar.

Radamel Falcao and Kamil Glik went close with headed efforts for the hosts, but it was Juve who took the lead with a wonderful team goal after 29 minutes.

The move started all the way back with Buffon and picked up in pace when an impressive flick from Paulo Dybala allowed Alves to find Higuain, who charged towards goal before playing it back to the former Barcelona defender down the right.

Alves then sent a lovely return backheel into Higuain's path, which the striker took in his stride, firing a low finish into the far corner from 15 yards.

The goal slowed Monaco's momentum and Juve's Dybala had a free-kick saved by Danijel Subasic prior to the interval.

But Monaco should have equalised early in the second half, Falcao failing to beat Buffon with an effort lacking power after Bernardo Silva had impressively set him up.

Juve then wasted an excellent chance of their own, Claudio Marchisio – starting in place of the suspended Sami Khedira – capitalising on a loose pass and racing in on goal only to be denied by Subasic's legs.

But the visitors did double their lead just before the hour mark, with Higuain striking again.

Alves was once more the creator, exchanging passes with Dybala before sending in a cross from the right, Higuain sliding in at the back post to convert left-footed from six yards.

Leonardo Jardim brought on Joao Moutinho, Valere Germain and Almamy Toure as he looked for a way back into the tie.

But Juve, who themselves withdrew Higuain, prevented Monaco from creating any chances of note until Buffon had to make a crucial save as the match entered stoppage time.

Germain latched on to Moutinho's free-kick and powered a header at goal, but the veteran goalkeeper tipped it over as the visitors kept yet another clean sheet and took a huge step towards the final.