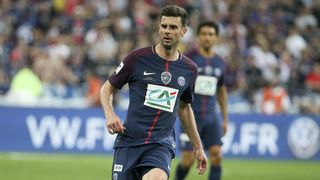 Thiago Motta has what it takes to extend his career in football as a successful coach, according to outgoing Paris Saint-Germain boss Unai Emery.

Former Barcelona and Inter midfielder Motta will retire at the end of the season and take up a role with PSG's Under-19 team, with Thomas Tuchel expected to replace Emery.

The 35-year-old this week declared he would like to take over the Ligue 1 champions in the future, and his boss feels that aim is certainly achievable.

"Thiago Motta is an exceptional player, a great person with a strong history in football," Emery told a pre-match news conference ahead of Saturday's clash with Rennes at Parc des Princes.

"He won 28 titles and played 229 games for PSG. He gave a clear identity to the team. He has the qualities to have a good journey as a coach."

PSG will be without Dani Alves and Marco Verratti for their final home game of the season, and Emery is hopeful the Brazilian recovers in time to feature at the World Cup.

"I'm very sorry for Dani Alves, he gives everything at training and in matches. Not every player would go after the ball the way he does even when he is injured," he said.

"At 35, he still has the same competitive spirit. I hope that he recovers ASAP.

"The medical staff are studying what is best for him. He cannot play, neither can Marco. I hope the rest of the squad will be fine."

While Emery's exit from PSG has been confirmed, the future of superstar forward Neymar remains the subject of much speculation.

The 26-year-old joined from Barcelona for a world-record €222million last August but has been persistently linked with a switch to Real Madrid.

Quizzed on Neymar's future, Emery simply said: "Ask Antero [Henrique, sporting director] if he has a response. I am not the person for that."