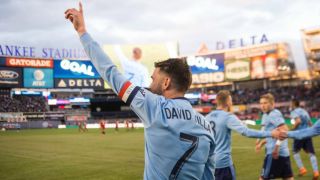 New York City booked a play-off berth after defeating Chicago Fire 2-0 to end their winless run in MLS on Wednesday.

Heading into the midweek clash, New York had failed to win any of their past six matches following three defeats and as many losses.

But New York returned to form and secured a post-season spot for the third consecutive year thanks to Alexander Ring and David Villa at Yankee Stadium, eliminating the Fire from the play-off race in the process.

After a goalless and uneventful first half, Ring broke the deadlock within two minutes of the restart – the Finnish midfielder capping a fine team move, having been teed up by Villa.

New York City are third in the Eastern Conference and 10 points adrift of Supporters' Shield leaders Atlanta United, while the Fire are 12 points outside of the play-off positions.