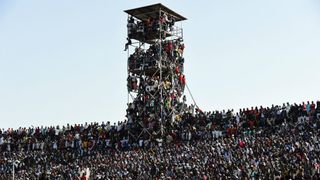 The Nigeria Football Federation (NFF) has been fined $5,000 by the Confederation of African Football (CAF) due to over-crowding and a lack of security during its national team's Africa Cup of Nations qualifier against Egypt in March.

The 1-1 draw took place at Ahmadu Bello Stadium in Kaduna – a 16,000-capacity venue, although multiple reports have suggested around 40,000 people were in the ground.

Pictures of fans climbing and perched upon broadcasting towers and watching the match from the roof of a stand prompted outcry and CAF elected to act.

The offences committed by the NFF, as listed by the CAF Disciplinary Board, were "spectators over packed in stadium" and "lack of security".

The NFF has also been warned that further sanctions will be applied if there is a repeat of such incidents.

Egypt won the subsequent return match 1-0 in Alexandria to all but end Nigeria's hopes of qualifying for AFCON 2017 in Gabon, although the Egyptian Football Federation has also been fined $5,000 for "excessive usage of lasers" during that match.