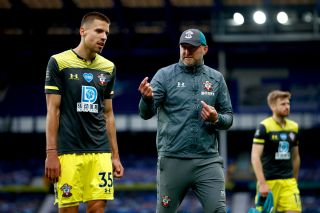 Southampton manager Ralph Hasenhuttl has hinted he may have to rotate his squad with three games in the space of six days, but insisted they will “play 100 per cent” at Manchester United on Monday.

The Saints start next week with a trip to Old Trafford before they return to St Mary’s on Thursday to host Brighton.

A tricky period concludes with a visit to south coast rivals Bournemouth on Sunday and it will force the Austrian to judge which players can feature in all three fixtures.

While that is a dilemma to solve for the latter part of next week, he is ready to unleash his best XI against in-form Man United.

“I am looking intensely at the players to see how they are and how they feel,” Hasenhuttl said.

“It was clear for me that we will have to be fit for this period and this was the message from me in the lockdown.

“I am very impressed with their fitness at the moment and I don’t have the feeling that they are struggling or will have a problem with injuries.

“The rest is taking the best possible team on the pitch because we want to win the next four games we have, but that doesn’t mean the other lads won’t get the chance to play because next week it will be more difficult with only two days’ rest between the games.

“This is a short period to recover, so then it’s more likely we will change but on Monday it’s quite possible that we play 100 per cent.”

Defender Jannik Vestergaard should provide Southampton with a boost by returning from a quad injury.

He missed Thursday’s 1-1 draw at Everton, but Hasenhuttl gave him a chance of being back for the Old Trafford clash.

And the 52-year-old admitted they may not feature again until the 2020-21 season, which puts the onus on Stuart Armstrong and Nathan Redmond being able to stay fit.

“It is quite tough, I think unlikely,” Hasenhuttl said when asked if Boufal and Djenepo would return during the current campaign.

“Yes, that’s right with them both out, we have lost two 10s, so the guys must stay fit.

“It is always a very demanding job to do, not only physically, but mentally and tactically and we don’t have as many alternatives.”