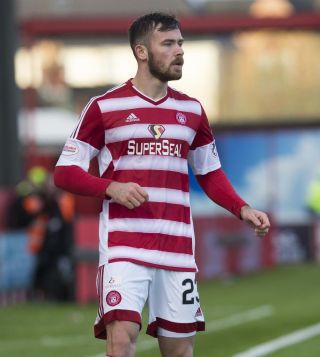 Hamilton boss Brian Rice lauded academy graduate Lewis Smith after he capped off a fine performance with a goal in their 3-1 win over Clyde in the Betfred Cup.

Scott McMann and Blair Alston goals had the Accies in control but Clyde responded through Kristoffer Syvertsen.

Smith, 19, ensured victory for Accies to move them into second place in Group F and a step closer to qualification.

Rice said: “Young Smith got a goal he thoroughly deserved from his performance. I know the talent the boy has got. He’s been pushing at the door all pre-season and at the end of last season and this was an opportunity to get him playing.

“We saw what sort of player he could be. If he keeps working hard in training he’s got every chance of featuring more for us this season.

“I’m delighted that we got our first win.”

McMann also grabbed his first goal for the club but has had to wait 106 games to do so.

Rice added: “Scott McMann should have a lot more goals than that with the athleticism he’s got to get up and down the pitch. I’m surprised that was his first goal for us.”

Clyde boss Danny Lennon said: “We’ll use these games as building blocks and for long periods I was very pleased in the way we moved the ball, the pressing, the tempo and the effort.”

“This was a great test for us and it’s one we’ll take a great deal from.”