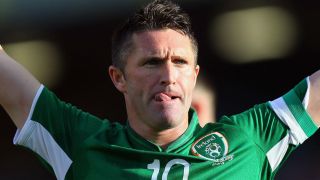 Robbie Keane has announced his retirement from football after being named as assistant to new Republic of Ireland boss Mick McCarthy.

Keane - his country's record-holder for both caps (146) and goals (68) - brings down the curtain on his playing days following a career that has taken in stints with Tottenham, Liverpool, Inter and Los Angeles Galaxy, among many more.

The 38-year-old made his professional debut for Wolves in 1997 but says his time at White Hart Lane, where he won the 2007-08 League Cup, and representing Ireland were the highlights of his career.

"I had the great privilege to represent and captain Tottenham over 238 games," he said. "I had many wonderful times there and I will look back on my days at White Hart Lane with great fondness. The club will always hold a special place in my heart.

"Playing and captaining my country has been the highlight of my career. I enjoyed every moment of the most incredible journey with the Ireland team over an 18-year period and, as I have said many times before, words cannot express how proud I am to be Irish. I hope I have made the fans proud wearing the green jersey and armband.

"It was always an honour to play for my country. Representing my country in the 2002 FIFA World Cup and two UEFA European Championships Finals are particular memories I will cherish forever.

"I take great pride in having scored 325 goals in 737 club appearances and 68 goals in 146 international appearances for the Republic of Ireland. But, for me, it was about making my family proud and the friendships that this wonderful game has given me.

"It is difficult to summarise a 23-year career but I feel incredibly lucky to have had the opportunity to do something I love every day."

Keane and Terry Connor were confirmed as assistants to McCarthy on Sunday, with the former Wolves, Sunderland and Ipswich Town boss drafted in for a second stint with the national team until Stephen Kenny takes over in 2020.

"With the closing of one chapter comes an exciting new adventure," added Keane. "I am incredibly proud, honoured and excited to now be working alongside Mick McCarthy, Terry Connor and the Irish international team over the next number of years.

"This is a role I have massive passion, energy and enthusiasm for and I hope to use my experiences to contribute towards a bright future in Irish football.

"To all those who believed in me, supported me and picked me up when I needed a hand, you can never know how much that has all meant. It was an honour to represent you."