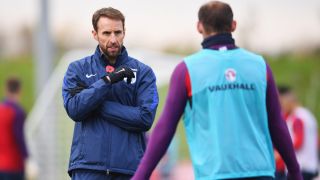 England manager Gareth Southgate admitted he was yet to speak to Wayne Rooney about his farewell game, but is glad the forward is getting a tribute.

Rooney, 33, will make his 120th and final international appearance in England's friendly against the United States at Wembley on Thursday.

Southgate said he had not discussed the clash with the DC United star, adding there was no need for him to be involved in the entire process.

"I've not spoken to him since he came and was ambassador for the under-17s finals [in April]," he told UK newspapers.

"We had a good discussion there but we haven't directly discussed this, because there was no need for that.

Here's what had to say about the USA game being dedicated to :November 4, 2018

However, Southgate is happy Rooney is getting an international farewell despite criticism of the idea.

"I was offered the opportunity to work with Wayne and asked, 'Was I happy with him playing part of the game?'" he said.

"I have been happy to facilitate that and I think it's an appropriate tribute for him."