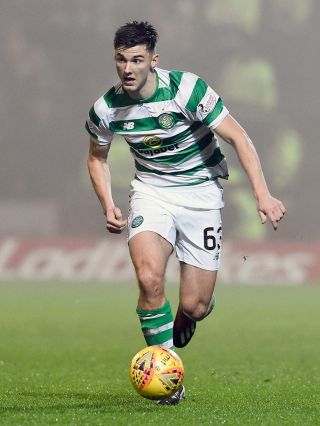 The Hoops left-back last played against Aberdeen at Pittodrie on May 4, the day the Parkhead club clinched their eighth successive Ladbrokes Premiership title and he will undergo an operation on a double hernia next week.

Tierney, troubled by injury throughout the second half of the season, will not be available for new Scotland manager Steve Clarke’s first squad for the 2020 European Championship qualifying games against Cyprus and Belgium next month but is ready for the Jambos match, where a Celtic victory will confirm an unprecedented nine domestic trophies in succession.

The 21-year-old said: “I have been training the last two days and that is the hard two days. I think I have coped quite well with that so it is positive going into the game.

“I would love to go away with Scotland but unfortunately the operation is booked for a few days after the cup final so that would rule me out.

“I think most people are within three and six weeks (out) so it is not too bad. The operation will fix it, that’s the good news.

“I will look forward to getting the operation and hopefully get back fit as soon as I can.”

The former Celtic youth player is “gutted” to be missing out on Scotland’s double-header against Cyprus at Hampden Park on June 8 and Belgium in Brussels three days later.

However, he is optimistic about the future of the national team as he welcomed the “great appointment” of Clarke, who took Kilmarnock from bottom of the Ladbrokes Premiership into Europe next season before departing Rugby Park at the weekend.

“We all know what he is about and how good he is and that’s why everybody is so looking forward to working under him and why I am gutted that I won’t have the chance to make a first impression on his first squad,” said Tierney.

“You are frustrated, you want to make an impression with the new manager but I have to think of myself long-term as well.

“What he has done with Kilmarnock is incredible and hopefully it can happen to the national team as well and he can take us forward.

“You are hoping that as a national team you are harder to beat, you can score more goals and you can keep more clean sheets.

“That is what we are looking to do and I think it is a great appointment to do that.”

First, though, is chance of making more history at the national stadium on Saturday and Tierney insists his appetite for success is far from sated.

He said: “For me, every single trophy gets better and better each time and you want that feeling more and more, so there is no added or extra motivation.

“We know what is at stake and we know how good a feeling it is to win and I think that makes you want to win so much, the feeling is so sweet.

“You work hard for it and to finish off a season with a trophy would be a dream come true for everyone.”