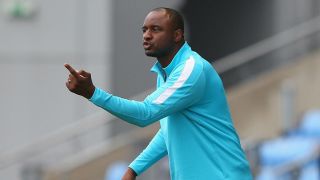 Vieira heads to the Ligue 1 club as a replacement for Lucien Favre, who is taking over at Borussia Dortmund.

The 41-year-old has been in charge of New York City since 2016, having led the Manchester City reserves following his retirement from playing.

"I would like to thank City Football Group and New York City FC for the opportunity to have coached this tremendous football club," Vieira said in a statement on Sunday.

"Leaving New York is an incredibly difficult decision for me and for my family and one that has not been taken lightly.

"From the beginning, City Football Group and its leadership, particularly our chairman Khaldoon Al Mubarak, Brian Marwood, Ferran Soriano and Marty Edelman, have believed in me and have helped guide me through the last eight years of my career – starting with my time as a player and ultimately culminating with my first opportunity to manage a first team."

Vieira takes the helm of a Nice outfit that finished eighth in Ligue 1 last season – just a point outside the European places.