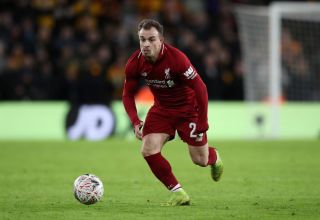 Liverpool winger Xherdan Shaqiri has pulled out of Switzerland’s squad for Euro 2020 qualifiers against Georgia and Denmark.

The national team reported the 27-year-old had a groin problem and had been replaced by Young Boys’ Kevin Mbabu.

Despite featuring in every one of Jurgen Klopp’s last seven matchday squads, Shaqiri has not made an appearance since coming off the bench in the goalless draw at Manchester United on February 24.

Since his last start on January 30 against Leicester, the Swiss has managed just 39 minutes of football in two substitute appearances.

Liverpool’s next match is at home to Tottenham on March 31.