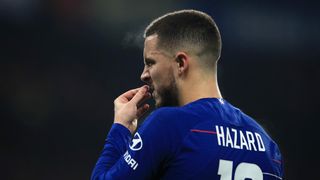 Chelsea assistant coach Gianfranco Zola has sympathised with Eden Hazard's frustrations, but has said the Belgium winger can still work harder to help the team.

The Belgium winger's form has fluctuated this term, Hazard starting the 2018-19 campaign brilliantly before fading after being asked by Maurizio Sarri to play as a false nine.

Hazard was back on the left as Chelsea beat Tottenham on penalties to reach the EFL Cup final on Thursday, the forward scoring the Blues' second goal in a 2-1 success in the second leg.

And while Zola sympathises with Hazard's frustrations over having to play different positions, the Italian feels Chelsea's star man can exert more energy at times.

"I was very much like Eden," Zola told reporters. "I was a very positive player, I liked to move around the pitch, find the spots on the pitch where I could receive the ball, turn and make the damage to the opposition.

"I was very, very similar and I do understand that. I believe we try to give him this but also to be an organised team defensively and offensively. Especially offensively. That's why we ask Eden sometimes to put himself about in working hard.

"I know that's not his best quality. We understand that sometimes he needs to be fresh when he receives the ball. There is no doubt that we are on the same page. We want to find a common ground where he can get the best out of himself and the team can benefit from him.

"Not only when he is scoring goals but when we have moments in the game where we need everybody to defend and everybody to press. That's exactly what we are trying to do. Eden, I think, I have to be fair that he has been doing it.

"He has been trying to do it. We are very demanding because we want to do it all the time. I am sure that we will find a compromise. I am not in a position to criticise a player like Eden. We believe, Maurizio said one thing, that the potential of Hazard is greater than the performances.

"So he is not criticising what Eden is doing but he believes he can do much more for himself and the team. That's all he is saying. This is the situation he wants Hazard to understand. Again, when we see his performances we look forward to seeing more and more."

Chelsea's loan capture of Gonzalo Higuain from Juventus is expected to enable Hazard to feature out wide on a more regular basis, with Zola accepting the Belgium international prefers to operate off a striker.

"It was very, very similar to when I first came here," Zola added. "I had Mark Hughes or Luca Vialli, who when I could play off them it was much better for me because it would give me the space and freedom.

"I would use their physicality to get the spaces I wanted and we played fantastically, so I understand for Eden. He has a very good understanding with [Olivier] Giroud that we saw yesterday [Thursday]. Olivier had a fantastic game in my opinion. I am sure he will gain the same understanding with Gonzalo Higuain."