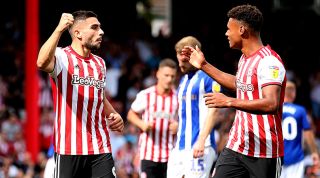 You'll get nothing out of Leeds in January – the Whites are currently flying high top of the Championship under Marcelo Bielsa, and still coming back down to earth after winning their last two league matches in dramatic late fashion. Centre-back Jansson has played a huge part in their rise, adored by Leeds fans ever since his 2016 loan move from Torino.

As things stand, the Swede will make it back to the Premier League with his current club – but top-flight sides will be on guard nonetheless. Championship sides haven't quite hit the halfway mark yet, after all.

Few sides boast experience like Jansson's: a Sweden international who played at the World Cup, and featured in the Europa League with his two previous clubs (Torino and Malmo). He is just seven Championship appearances short of his 100th for Leeds, and at 27 he still has years eft on the clock. Most importantly, he's also ambitious – there were suggestions he could even have left last summer when he declared: "I really enjoy Leeds but I want to see the ambition that now is the time to take them up to the Premier League." So far, so good...

Relegation from the Premier League often leads to a period of introspection and readjustment as clubs look to address what went wrong. For Swansea, it was felt that the principles which had underpinned their ascent had been misplaced in the fight for survival. Graham Potter’s appointment signalled a return to old ways, and faith being placed in young players once more.

Rodon, who spent last season on loan in League Two with Cheltenham, has been one of the major beneficiaries. The 21-year-old centre-back made his Swansea debut against Preston on the second weekend of the season and has started all but two games since. A composed ball-playing defender, he was recently called up to the Wales senior squad.

The Championship’s top goalscorer has already found the net 15 times this season, as well as claiming six assists. A busy, bustling player who had limited chances to impress at former club Saint-Etienne, Maupay joined Brentford for £1.6 million in July 2017 as the perfect example of their innovative recruitment policy. His value has since spiralled.

The ex-France U21 international’s finishing was occasionally wayward last season but he’s worked hard to become more clinical while still contributing in other areas. Dean Smith's departure to Aston Villa seems to have unsettled the Brentford project somewhat, and they may be even more susceptible than usual to big offers for leading players this January. Huddersfield are keen.

Aside from Marcelo Bielsa himself, the system is the star under the eccentric Argentine. Several players, including Kemar Roofe, Liam Cooper and Pablo Hernandez, have enjoyed excellent seasons on an individual level but Bielsa’s high-pressing, all-action philosophy ties everything together. That, and Kalvin Phillips.

The forceful and commanding defensive midfielder breaks up play superbly and sets Leeds on their way. The 23-year-old doesn’t steal attention in terms of goals and assists, but his role is integral to the team’s success. A self-sacrificing player, Phillips has also filled in at centre-back when required – and that has often been the case – without putting a foot wrong.

The former Middlesbrough man has been holding his own personal goal of the season competition this season. He’s scored six times so far, and four have been scorching efforts from outside the box. For all his technical ability, though, there had been a lack of end product in previous years that the versatile midfielder is finally starting to address.

Reach has been one of Sheffield Wednesday’s standout performers in a difficult campaign, and will undoubtedly attract interest from higher up considering the club’s current financial constraints.

A revelation for Hull last season, Bowen showed plenty of trickery and intent from out wide by scoring 15 goals in 44 appearances. He’d played a few times in the Premier League, having made his first start in the 7-1 hammering by Tottenham, but seized the opportunity to become a regular following relegation.

Bowen was linked with a move to Everton over the summer, where he would have been reunited with former manager Marco Silva, so supporters were pleased to see him stay at the KCOM Stadium. His effervescent attacking contributions have been among of the few bright spots in a continued battle to stay clear of the bottom three.

He’s sometimes had to play second fiddle to Neal Maupay, but Watkins’ game is arguably more rounded than the Frenchman’s and he enjoys cutting in from out wide. The £1.8m signing from Exeter in summer 2017 has built on an exciting debut campaign for the Bees to become a player they can rely on to deliver when it matters most.

What's more, he's still only 22. Watkins is already well within sight of his goals tally for last season despite missing a handful of games through injury, and will hope to break Brentford out of their current rut. Whether he'll be around beyond the end of the transfer window, however, remains to be seen.

After a chastening debut season in English football where little came together as intended, Daniel Farke has turned Norwich into one of the Championship’s most exciting teams – and surprise title contenders. Jamal Lewis, who only made his professional debut last December, has been a major factor in their success.

The young left-back has started every game this season bar the first two, and added to his total of Northern Ireland caps after making his debut against South Korea back in March. On the opposite side another academy graduate, Max Aarons, has also been making a name for himself.

Joe Bryan’s £6 million move to Fulham was richly deserved following his excellent form for Bristol City. But the loss of such a talented left-back has barely been felt by the Robins, with Kelly, another product of their youth system, filling the void terrifically.

The 20-year-old England youth international, who can also play in the centre of defence, has demonstrated impressive maturity since making his breakthrough last season. He is strong and assured on the ball, and has what it takes to reach the top.

OPINION Why Poch, the patron saint of lost causes, should defrost Fernando Llorente

He only turned 20 back in June but few players are as comfortable on the ball as Eze. The QPR midfielder has simply picked up where he left off last season, combining dazzling skill and close control with an eye for a killer pass. Three goals and as many assists is a promising return, but doesn’t tell the whole story.

Eze’s stellar form hasn’t gone unnoticed either, putting him at the centre of a tug of war between England and Nigeria. He’s eligible to represent either country at international level but is yet to commit either way. After previously training with the Nigerian senior squad, he made his debut for England U20s in October.