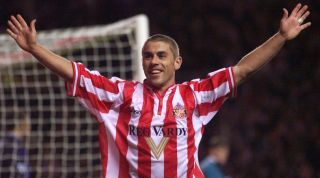 Many will be expecting Ryan Sessegnon and Ruben Neves to make a big impression on the Premier League after dominating games in the Championship last year. Neither has any experience of playing in the top flight of English football but that doesn’t have to be any barrier to success.

None of these 10 players were new signings; all earned their chance to impress having won promotion the previous year and went on to have a major impact on their clubs’ fortunes in the Premier League. There’s surprisingly prolific goalscorers, lower-league journeymen who eventually made the step up and discarded players who had a point to prove.

Andy Cole was the undoubted star turn of Kevin Keegan’s newly-promoted Newcastle side, scoring 34 goals as the Magpies finished third in the table – but a single appearance in the First Division for Arsenal three years earlier rules him out of contention for a place in this list. John Beresford might not have grabbed as many headlines but he was still a key component in the rise of the free-scoring ‘Entertainers’.

An attack-minded left-back who delivered plenty of crosses for Cole, Peter Beardsley and others to feed off, Beresford started 35 games for Newcastle as they qualified for the UEFA Cup. The former Barnsley and Portsmouth man also earned the first of two England B caps towards the end of the season, although he was unable to break into the full senior squad.

Full of running, a good technician and an excellent distributor of the ball, Muzzy Izzet was a big part of Leicester’s success under Martin O’Neill. Unable to make the grade at Chelsea, he was loaned out to the Foxes during their promotion-winning season, making the move permanent for £800,000.

It proved a bargain. The London-born midfielder, who went on to represent Turkey in the 2002 World Cup, forged a great understanding with the combative Neil Lennon as Leicester finished in the top half of the table on their return to the Premier League. Izzet made 34 league starts and scored three goals, one a cracking long-range strike away to Middlesbrough, as well as contributing to the club’s League Cup final win against the same opponents.

The archetypal example of a promoted player picking up where they left off from the previous season. A clever and instinctive striker, Kevin Phillips had scored 23 goals in 26 games to take Sunderland to the First Division title despite missing four months of action through injury. He even earned an England debut along the way.

Released by Southampton as a trainee, Phillips impressed at every stage on his journey back to the top, starting in non-League with Baldock Town. Doubts persisted despite his subsequent rise, however, and Sky Sports pundit Rodney Marsh infamously predicted that he would struggle to score more than five goals in the Premier League.

Phillips had notched that many by the end of August and finished the season with 30 goals and the European Golden Shoe. Big bids from Arsenal and Aston Villa followed but he chose to stay put for another three years.

Following hot on Kevin Phillips’ heels was Marcus Stewart, another striker who’d worked his way up from the lower leagues and retained his goalscoring touch when he reached the top level. There were concerns that Stewart wouldn’t cope with the physical demands of the Premier League as it took him five games to get off the mark, but from then on he never looked back.

The former Bristol Rovers and Huddersfield frontman scored consistently throughout the season to finish just behind Jimmy Floyd Hasselbaink in the race for the Golden Boot. His 19 goals, including a hat-trick against Southampton, were the most by an English player in the Premier League that year but an international call-up eluded him. Regardless, Stewart helped to fire Ipswich to fifth place and qualification for the UEFA Cup.

The right-back took a circuitous route to the Premier League, via Welling, Birmingham and Notts County, but quickly proved himself once he made it. Steve Finnan was 25 years old and full of confidence coming off the back of an outstanding year with Fulham, who easily won the First Division title under the guidance of Jean Tigana.

Hardy and dependable, Finnan didn’t miss a single minute of action in his first Premier League season as he helped the Cottagers to mid-table safety. The Irish international was named Fulham’s player of the year and also voted into the PFA Team of the Year ahead of some far more illustrious names. Another season of consistently excellent performances raiding down the right side earned Finnan a move to Liverpool, where he won the Champions League in his second season.

Sold by Arsenal after three separate loan spells as a youngster, Steve Sidwell had to rebuild his career at Reading. In his fourth season with the club, he played a major part in their record-breaking promotion to the Premier League, as they picked up 106 points. He then adapted superbly to life in the top flight as the Royals finished eighth.

Sidwell’s impressive midfield partnership with the energetic James Harper, another former Arsenal academy graduate, was central to their success. A strong passer with an eye for goal, he scored four times, including a brace in a 2-0 win over Aston Villa. Having turned down the offer of a contract extension, Sidwell signed for Chelsea at the end of the season but found regular first-team football hard to come by at Stamford Bridge.

Unexpectedly promoted through the play-offs under Aidy Boothroyd, Watford weren’t anywhere near ready to compete in the Premier League. They made a swift return to the Championship, finishing bottom of the table and 10 points from safety, but Ashley Young was no longer with them by then. The Hornets had cashed in on their star man during the January transfer window, as Aston Villa paid in the region of £9.5m to make him their record signing.

His performances had warranted it. A right-footed winger, most effective at cutting in from the left flank, Young’s trickery and pinpoint crosses ensured that he stood out in an otherwise limited Watford side. He scored a brace in a 3-3 draw with Fulham and set up several more goals in the first half of the season before Villa swooped.

A move to the Midlands helped Young to compete towards the top of the Premier League, break into the England side and eventually secured him a transfer to Manchester United.

Ian Holloway’s Blackpool were not so much built around Charlie Adam, as entirely dependent on him. He offered the spark, creativity and technical quality that elevated a group of largely unremarkable players, earning them promotion to the Premier League in 2010, then took them far closer to staying up than anyone expected. The Scottish midfielder’s whims were indulged and his deficiencies masked as team-mates were assigned to do most of his running.

Adam trundled around the middle of the park at his own pace, spraying passes all over the pitch and shooting whenever the mood took him. He played with complete freedom and was responsible for all set pieces and penalties. Adam contributed 12 goals and eight assists in Blackpool’s unsuccessful fight for survival, earning him a place on the shortlist for PFA Players’ Player of the Year. He remained in the top flight after Blackpool were relegated, signing for Liverpool.

While several players on this list went on to bigger things, such as international recognition or moves to more high-profile clubs, Grant Holt faded back into relative obscurity. The English striker’s first season in the Premier League arrived late on in his career (he was 30 by the time it began) and was by far his best. His 15 goals put him eighth in the top scorers’ chart and on the cusp of a place at Euro 2012.

Like former Rochdale teammate Rickie Lambert, Holt beat a path to the top flight courtesy of two successive promotions. He became a talismanic figure during the rise of Paul Lambert’s Norwich and fared much better against Premier League defences than was anticipated. Something of an old-fashioned battering ram, he scored some delicately-constructed goals too, such as a lob and header finish against Wolves.

Quiz! Can you name the highest three record signings for every Premier League club?​

16 of football’s weirdest sponsors ever

They say good things come to those who wait and Rickie Lambert should know better than most. After years spent in the lower reaches of the Football League (plus a spell working at a beetroot factory, as any self-respecting commentator has mentioned), a £1m move to Southampton in August 2009 transformed his prospects.

Lambert and the Saints achieved two promotions in three years, during which he scored 88 goals in all competitions, finally making it to the Premier League at the age of 30.

A strapping striker, with good touch and technique, as well as an excellent record from the penalty spot, Lambert led the line impressively as the Saints finished 14th. He started every game and scored 15 goals. England caps (and goals) followed, and Lambert even went to the 2014 World Cup under Roy Hodgson. A move to his boyhood club Liverpool came that summer but was, unfortunately, the beginning of the end for his late-blooming career.