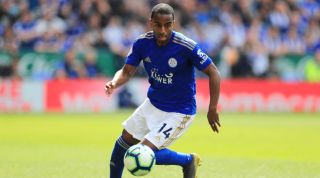 Buying young, hungry players and fitting them into a system is typical of Tottenham Hotspur’s transfer strategy, so you'd expect Mauricio Pochettino to be eyeing several of Europe's up-and-coming right-backs to replace Kieran Trippier in north London this summer.

Trippier was a dead-ball specialist and was appreciated for his attacking runs, but lost his way in north London to the point that Spurs will have been happy to recoup £20m for his services.

Here are five players we think could be fine replacements...

After scoring four goals and providing six assists for PSV in last season’s Eredivisie, Dumfries is firmly on the radars of Premier League clubs. Considering his £25 million valuation, the 23-year-old could be a worthwhile investment for any top team considering the inflation in the transfer market.

The Holland international possesses frightening pace, has the strength to win aerial duels and dribbles the ball well. He's still a little raw defensively, and his crossing needs some work, but performances so far suggest a fine right-back in the making.

Rotterdam-born Dumfries is now a regular for his national team as part of Ronald Koeman’s back five, and represented the Oranje on Nations League duty this summer as they beat England and lost to Portugal in the final.

The Algerian took Ligue 1 by storm in his debut season at Nice, netting six times from right-back. He also featured four times for Algeria en route to the Africa Cup of Nations final, until a fractured collarbone forced him off after 31 minutes of the semi-final against Nigeria.

Atal's outstanding dribbling ability makes him an excellent option for Pochettino, who values attacking full-backs. The difficulty lies in the way Spurs set up tactically, however. Last season a 4-2-3-1 formation was regularly used, which meant a flat back four.

The 23-year-old tackles well and can intercept play with his speed, but Pochettino would have to take a gamble on a player who only moved to Europe from domestic football last summer.

Fiorentina endured a near-disastrous campaign in 2018/19, finishing three points clear of the relegation zone. That could tempt versatile defender Milenkovic away from Florence this summer in search of Champions League football.

The 21-year-old – reportedly a target for Manchester United – is an excellent reader of the game, and a calming presence in possession. Former manager Stefano Pioli used him as both a right-back and centre-back last season, and his attributes make him a good fit for either position.

Tottenham could gett a player more suited to defending rather than bombing forward, but Milenlovic is hot property and could also offer then a solution to their Toby Alderweireld problem.

Leicester have a squad capable of mounting a top-six challenge in 2019/20, and Brendan Rodgers rightfully sees his Portuguese speedster as an essential part of that. The Foxes simply don't sell unless they have to, making this a particularly difficult one for Spurs.

Ricardo is excellent going forward – Claude Puel played him as a right-winger for the early parts of last season – and at the other end, only three players in the Premier League averaged more tackles per game in 2018/19.

Spurs may find it tought to afford him after splashing out £55m on Tanguy Ndombele earlier this window, but Leicester's marauding right-back would suit them perfectly.

Nope, not a namesake – it's the same bloke they already have.

The Argentine impressed when filling in for Trippier at right-wing-back against Manchester City, however, and has also been used there for Argentina in the Copa America. Albiceleste coach Lionel Scaloni was pleased with the 21-year-old's showings, and Mauricio Pochettino could have the answer to his right-back void right under his nose.

It will be a long-term project that requires patience – but that's exactly the kind of thing that Spurs' boss gets up for in the morning.