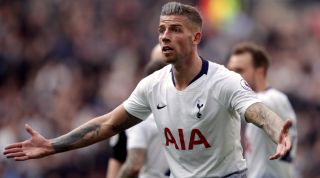 One of the most anticipated – and dreaded – transfer sagas of the summer still hasn’t materialised. The worst-kept secret in football is that Toby Alderweireld has a £25m release clause in his Tottenham contract and yet, still, interest in the centre-half remains scarce. Time is a factor, too, as the clause expires on July 26.

It’s a strange situation which contradicts much of what is assumed about the transfer market. Even the slightest suggestion of talent now comes at a fantastic premium and yet Alderweireld, a seasoned, classy centre-half with an ultra-modern set of abilities, remains on the shelf.

The simplest explanation for why might lie in Spurs’ progress over recent years. The limitations of Mauricio Pochettino’s squad may be indicated by a gentle decline in their points tally over the last three years, but they are now a consistent Champions League qualifier – and one playing inside one of the best stadiums in the world, at that. Having now seen the inside of a major European final, there’s every justification in believing that Alderweireld is happy to stay.

For the sake of his career, perhaps, or because he knows that he’ll be a free agent in a year’s time, at which point his opportunities will broaden significantly.

Tempting as that diagnosis is, however, it ignores another ticking clock. Alderweireld turned 30 in March and will know that his capacity to earn is now receding. The £80,000 per week he currently earns may place him in stellar Tottenham company, but he remains significantly underpaid by European standards. Even if he were to renegotiate and accept an improved offer in north London, it would pale in comparison to what he might be offered by another Champions League contender.

But those kind of clubs have shown a curious reticence around Alderweireld. In part, that can be explained by demand: neither Real Madrid nor Barcelona have any pressing need for a centre-half, Juventus would most likely be keen on a younger player to complement their incumbents, and Paris Saint-Germain are busy disentangling themselves from their costly Neymar experience.

Elsewhere, despite selling Mats Hummels back to Borussia Dortmund, Bayern Munich will already be entering the season with an embarrassment of centre-back riches. Lucas Hernandez was signed for a bold £80m, Benjamin Pavard has been snatched from relegated Stuttgart, and Niklas Sule and Jerome Boateng are already in place. It’s arguably the best-stocked defence in Europe.

But even where a need for Alderweireld actually exists, potential suitors are quiet. Manchester City remain strangely unconvincing at the back, in spite of their incendiary attacking football, and Manchester United show little urgency in rekindling their interest from last summer, despite glaring defensive holes which are yet to be filled.

As a destination, Old Trafford is certainly less than it was, but United’s downturn hasn’t affected their ability to offer competitive wages or afford large transfer fees. Paying £25m for Alderweireld would not only alleviate a significant structural problem in their side, but also represent the club’s finest footballing decision in years.

It’s not a bad problem for Tottenham to have, but it’s a difficult situation to explain. Six months ago, Alderweireld was the transfer market’s lowest-hanging fruit, destined to be plucked within minutes of the window opening. Since then he has managed some of his finest form in years, provided assurances over his durability and done nothing to damage his reputation – but only with the effect, apparently, of falling behind a whole host of other available centre-halves.

To date, only Roma have knocked on Spurs’ door with any real intent – and even their interest has been restrained by concerns over cost.

The £25m release clause is, according to reporting by Kristof Terreur, payable in three instalments over two years. Hardly a king’s ransom for a player of Alderweireld’s class; especially not when Roma have already raised over £30m by selling Kostas Manolas to Napoli. And definitely, definitely not when Tyrone Mings is moving clubs for a fee that could rise to £26.5m.

He’ll be back at Hotspur Way tomorrow.

Toby Alderweireld is allowed to leave Spurs for £25m, provided his transfer is completed at least 14 days prior to the close of the summer transfer window. Payment made in no more than 3 installments, over no more than 2 years.#thfcpic.twitter.com/cwMyx8AcsF— Kristof Terreur (@HLNinEngeland) July 10, 2019

Really, this is a question without an answer. Locally, it can be reasoned with reference to the homegrown player rules of which English clubs are increasingly mindful. But elsewhere, the logic is harder to track. Tottenham’s pre-season begins for real on July 21, when they face Juventus in Singapore. The first team will depart for Asia in the coming days and, after a stop in Germany for the Audi Cup, will return in the first week of August.

After July 26. After time runs out on their most alluring sale item.

Without something dramatic occurring before then, Alderweireld will still be a Tottenham player when the season begins. Having left their Rolls-Royce in the garage over the summer, unattended and with the keys in the ignition, the club will be delighted to find it still there on their return. Amazed, but delighted.