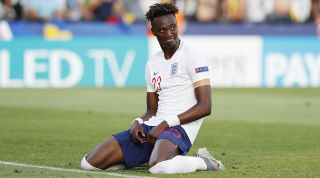 Chelsea have signed Mateo Kovacic in a £40 million permanent deal from Real Madrid following his loan spell at the club last season. Despite the Blues’ transfer ban, rules state you can make a signing (before June 30) if the player has been on loan in the previous campaign.

And that’ll be Lamps’s lot this summer. Chelsea’s transfer ban – which runs until the end of January 2020 – will force the club legend to look at what he’s already got at Stamford Bridge for 2019/20.

But is that such a bad thing? The Blues’ kids won the UEFA Youth League in 2015 and 2016, and have scooped seven of the last 10 FA Youth Cups. And here’s who could capitalise…

The 21-year-old Croatian has a contract at Stamford Bridge until 2021. Ziger played a key role last season at Sutton United as an emergency shot-stopper, and was prominent as the U18s reached another UEFA Youth League final – beating Dinamo Zagreb and Barcelona on penalties en route.

He joined the Blues as a 12-year-old from NK Zagreb, and could well replace third-choice keeper Rob Green, who was released by the club at the start of the month.

James was terrific on loan at Wigan Athletic last season, making 46 appearances and carving out a place in the Championship’s official team of the season.

The versatile full-back, who can feature on either the right or left, has been at Chelsea since the age of six. He captained the young Blues to FA Youth Cup glory in 2018, and could see action in the Premier League two seasons on. Cesar Azpilicueta endured a difficult 2018/19, and Davide Zappacosta is expected to move on this summer.

A player Lampard took to Derby, the 21-year-old made 55 appearances for the Rams in 2018/19 and featured 15 times for Aidy Boothroyd’s England U21s too.

Tomori has been at Chelsea since the age of six, making his senior debut during a 1-1 draw against Leicester in the final game of 2015/16. He helped the club secure consecutive UEFA Youth Leagues and FA Cup Youth Cups in 2015 and 2016, and could be a perfect replacement for the departed Gary Cahill.

The Dutchman was keen to leave Stamford Bridge in search of regular first-team football. However, thanks to Lampard’s arrival, the 19-year-old has now signed a new deal to remain at the club.

Having been mainly used as a wing-back in Chelsea’s youth set-up, the teenager could be a candidate to replace Marcos Alonso. Jay Dasilva has signed for Bristol City on a permanent transfer, and therefore Castillo could get plenty of opportunities to impress.

Signed from Exeter City in July 2017, the Welshman was part of Maurizio Sarri’s squad last season but made only two appearances in the FA Cup. He’s still only 18, however, and the full Wales international is fully expected to make his Premier League debut for Chelsea in 2019/20.

Ampadu was previously a target for Alex Ferguson at Manchester United, before Chelsea pipped the Red Devils to sign him. He can operate as a defensive midfielder or centre-back, meaning Lampard could use his versatility next season.

Another player who Lampard took to Derby and thrived. Mount netted 11 times and provided five assists in 43 games across all competitions for the Rams, and is already a fan favourite at the Bridge despite not yet making a first-team appearance for Chelsea.

The 20-year-old was Vitesse’s player of the year in 2017/18 before his successful loan spell at Derby. He has won two FA Youth Cups, the UEFA Youth League and U19 Euros, where he claimed the tournament’s Golden Player award. Mount could feature further forward, allowing N'Golo Kanté to drop back into his preferred defensive midfield role.

Abraham enjoyed a fine campaign on loan at Aston Villa last season, netting 26 goals in 40 games as Dean Smith’s side won promotion via the play-offs.

The 21-year-old does have three Chelsea appearances to his name having joined the club in 2004, and is eyeing a fist-team berth ahead of the new campaign. With Alvaro Morata out on loan at Atletico Madrid and Gonzalo Higuain not returning, Abraham arguably has the best chance of any Chelsea youngster to stake his claim.

He won the 2018 Toulon Tournament with England and will surely be given the opportunity to fulfil his dreams of becoming a Blues regular under Lampard.

REMEMBERED The imperfect hat-trick: Martin Palermo’s three missed penalties – and so much more – 20 years on