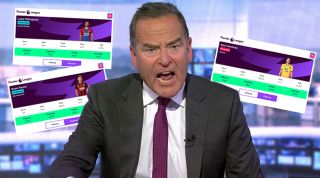 The football season never really ends. As soon as the league is finished, there’s an international tournament or seven. Before they end, the First Exploratory Nine Degrees Of Separation Preliminary Preliminary Round of the Europa League has kicked off, pitting the fourth-placed team from the Faroe Islands against Wales’s third-place finishers.

Fantasy football never really stops either. Every transfer rumour has FPL implications. The fixture list for the following season is treated like a devastating WikiLeaks revelation revealing why Boris Johnson really wanted his girlfriend to ‘get off his f***ing laptop’.

Already, there are 1.6m teams registered on the FPL website – that’s nearly 18 full Wembley Stadiums of people who have picked a team, created multiple templates and are agonising over whether they need Andy Robertson, Trent Alexander-Arnold or both. It’s probably both.

So now here are their – and your – fantasy futures...

1. Get excited about Day One Darling

There's always somebody who tears it up on the first day of the season: bags a brace, sets up three – and nobody saw it coming. They’ll typically be selected by 0.3% of the FPL community, and 0.29% of them will have them on the bench so almost nobody benefits.

By the start of GW2 their ownership will have rocketed to 25%+. Nobody loves a bandwagon more than the FPL community. For the remaining 37 GWs (certainly for the next 10) you’ll hear the moans and groans as our GW1 hero becomes the most spectacular fraud in Premier League history.

2. Blame VAR for your failure

Spitting about the FPL points you would have had were it not for that stupid bloody VAR which robbed you of a goal/assist/clean sheet is inevitable in 2019/20. Prepare for it. Embrace it.

Somebody in the FPL community should run a secondary scoring site comparing how the winners next season line up compared to pre-VAR times. The winner can wear an ‘I WAS ROBBED’ t-shirt for the whole of summer 2020.

Pep is probably a very nice bloke. His players all seem to love him, and that’s not likely to happen if he treats them like a human footrest. But he’s a bloody nightmare for fantasy football managers, rotating like a drunk ballet dancer and destroying gameweeks as a result.

How dare he. Does he not know what this means? Does he not realise the damage he has caused us all personally? Does he not comprehend that Dave in HR is probably going to build on his 32-point lead in our mini-league? Why Pep, why.

Probably best to conclude that he doesn’t care about your FPL team and get over it. Relax. It’s only a game…

It’s tempting to milk it. Your arch-rival racking up a pitiful total of 14 points in a gameweek as you swagger into your office on the back of a 76-point haul. You’re the alpha this week. He knows it. You know it. And you’re going to make sure he knows it. This is your time. Pile-on!

But stop – it’ll be your turn soon. You’ll drop a bollock and feel the humiliation. Your captain will be sent off in less than 24 minutes. Your defender will score two own goals before being hooked at half-time. You’ll be praying for mercy from your peers.

And they’ll treat you exactly as you treated them.

5. Ruin your Saturday with obsessiveness

Fantasy football team names: 49 excellent (and awful) ideas for yours this season

It’s 2pm on Saturday. You’re sat at home with Twitter fired up, your ‘Premier League Club Twitter List’ ready to go. You have Soccer Saturday on in the background, the dulcet mumblings of Merse soothing your furrowed brow.

You’ve checked that you really did hit save on your FPL team for the 83rd time since 11am. You’re all set. Now for the team news. Then 3pm to 5pm catching news of every goal, every assist, every key pass, every clean sheet. You’re mentally totting up your score quicker than Rachel Riley counting antisemitism claims against Labour.

But don’t do this. Go out. Close Twitter. Forget about FPL. Talk to your family and/or friends. Go for a walk on a beach or in a park. Embrace the world. You know why?

Because nothing you do after the deadline has passed will change a thing.

6. Get crippled by Kipling

Aside from making exceedingly good cakes, Kipling (same bloke, right?) also once opined: “If you can keep your head when all around you are losing theirs… yours is the Earth and everything that’s in it.”

But Kipling didn’t play FPL. If he had, he’d have amended his work to read: “If you can keep your head when all around you are losing theirs… then you’ve probably misjudged the situation.”

Contrary to earlier jibes, there are always at least one or two bandwagons that need to be jumped on every season. You need to realise this, and when all around you are losing their minds to get that red-hot player in, join them.

7. Lose your mind when doubling down

Until you’re screaming a word that rhymes with ‘banker’ when that worst attacking unit you’ve ever seen plunders their first away goal in 28 years within the first 10 minutes.

It’s not necessarily a tactic to avoid. But always prepare for the worst...

You’re inevitably going to end up in a situation whereby you have 12 or more viable choices for your FPL team, which means you must bench somebody.

No matter who, you have that niggle in your stomach that he’ll do something. So you switch him for that other guy, and the same feeling hits you. So you switch again, and again, and by the end you’re feeling extremely queasy and still haven’t a clue what to do.

No matter who you choose to bench, they’re going to smash it; a minimum 10-point haul that will lead to everybody you know saying, ‘How did you not see that coming? I’d never have benched him.’

And then you punch them in the face.

This is just a game. Nobody can tell the future. The players who are in the top 1,000 are just jammy – even they’ll admit that if you ask them.

So if you find yourself stressing out and not enjoying the FPL experience, then stop playing it. It’s for your own good.

Plus, it makes it easier for the rest of us to rise up the rankings.

You can read @NiallHawthorne’s “incredibly insightful, calculated and honest guest previews” (quote Hawthorne, N.) on FantasyYIRMA.com each week. Follow @FantasyYIRMA on Twitter and check out their fantasy football podcast, Bang Average, on your platform of choice.

FantasyYIRMA started in 2012 focused primarily on news and previews for the Fantasy Premier League. It’s now gone past the running joke that founder Ryan really should be doing something more productive with his spare time instead of peddling this absolute nonsense.

QUIZ! Can you name the Spanish players with 5+ Premier League assists?