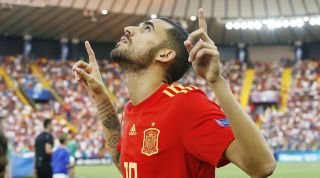 You’ve got to hand it to the Gunners: Dani Ceballos looks like a remarkably sensible signing to fill the void left by Aaron Ramsey, even if the deal is likely to last no more than a single season.

There’s no shame in struggling to find a permanent spot at Real Madrid, and the 22-year-old arrives fresh from being named in UEFA’s team of the tournament for the second successive European Under-21 Championship (won by Spain, naturally).

Ceballos shouldn’t have to break sweat to add his name to the list of compatriots who’ve assisted five or more goals in Premier League history – but for now he can only aspire to the 28 men below.

We’re sticking six minutes on the clock for you to recall as many of them as you can, and then let us know how you did @FourFourTwo – retweets up for grabs to those who don’t give away spoilers. You should be able to get the runaway leader at No.1…

QUIZ! Can you name the 50 African players with the most Premier League appearances?