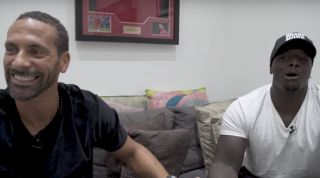 Akinfenwa scored 18 goals for Wycombe Wanderers in League Two last season – 10 more than he managed for AFC Wimbledon in the 2015/16 campaign.

He's got off to a superb start in his second campaign at Adams Park too, having plundered five goals in seven appearances so far.

So you can't blame the big man for thinking he should be pushed up from an overall rating of 64 into the silver bracket on FIFA 18.

Akinfenwa was asked by Ferdinand to predict what his new FIFA ratings were, before finding out the most important element – whether or not he was still the strongest player in the game for the fifth year running.

The 35-year-old isn't the only one unamused by his stats – Ferdinand recently informed a bemused David Luiz that he had a worse shooting rating than N'Golo Kante.

FIFA 18 is released into the wild on September 29.