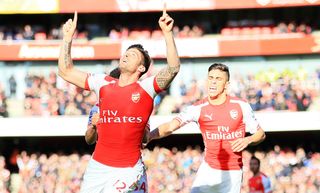 Olivier Giroud banished the demons of a difficult midweek with the crucial opener in Arsenal's 2-0 win over Everton at the Emirates Stadium.

Giroud's ninth league goal of the season, a sidefoot finish from Mesut Ozil's 39th-minute corner, was enough to help Arsene Wenger's side towards a crucial victory in north London to reclaim third place from Manchester United. The Frenchman had endured a torrid night against Monaco in the Champions League on Wednesday, where he was withdrawn after a poor display in Arsenal's 3-1 defeat to the Ligue 1 side.

It was a sorry end to another difficult game for Roberto Martinez's side, who enjoyed plenty of possession in midfield but struggled to create many meaningful chances to scare Gunners stopper David Ospina.

Everton remain closer to the bottom three (six points) than the top half (11 points) after their fourth Premier League game without a win.