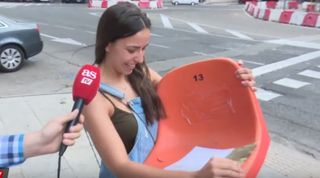 But with the much-loved Vicente Calderon set to be knocked down, the club opened its doors on Monday to give away each plastic seat previously occupied by a season-ticket holder - free of charge.

Each fan was handed a certificate of authenticity with their seat.

One fan told Spanish newspaper AS: "If you're an Atletico fan, you'll know what it means to have the seat you sat on, season after season, watching the team here."

Even though Atleti now play in a different part of the city, a number of their offices are still based at the old stadium, which has further delayed the demolition process.

And it seems some supporters are still finding it hard to say goodbye to their old home.

"It's a shame that they'll be knocking this down, the Calderon will always be our home," sobbed another fan.

Quiz! Can you name the last 20 goalkeepers to play for England?