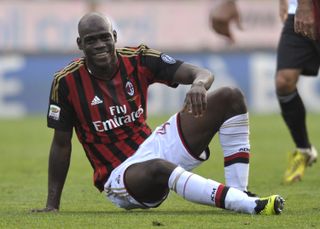 Mario Balotelli’s return to Italian football was intended to bring some much-needed tranquillity to the wayward striker’s life, not to mention act as the springboard to him joining the likes Leo Messi and Cristiano Ronaldo at the summit of the European game.

However, life has turned out to be anything but straightforward for Super Mario. After a period of grace back in his homeland, he is now finding it as difficult to cope with the pressures of Serie A as he did those of the Premier League.

In fact, where there was at least some humour in his antics at Manchester City and they could be laughed off as those of a callow youth, at AC Milan a more professional approach is required.

In conservative Italy, any anti-conformist behaviour is frowned upon, and Balotelli has found that out the hard way on his return from Manchester. Tellingly, when he gave his first press conference as a Milan player back in January, he was asked what he would not miss about England - he responded “the food and the press”.

He may now once again enjoy the perfect bowl of pasta, but his activities away from the pitch have probably made more headlines back in Italy than they ever did in the UK tabloids. The club have attempted to curb the more extravagant claims, but there is little they can do when Mario’s on-field behaviour lets him down.

The nadir was without doubt the meltdown at the end of last month’s match against Napoli, when he completely lost his cool and was reportedly overheard to have threatened the referee. A four-game ban followed, with Milan deciding it wasn’t even worth embarrassing themselves with an appeal.

The club line was that the player was out of control and beginning to believe all the fawning from those close to him, not to mention a glowing front-page spread in Sports Illustrated and a sit-down interview with CNN which had given the impression he was a mix of sporting god and super-cool man about town.

There is no doubt that the pressures on footballers are greater in Italy than they are in any other European country; what with three dailies given over to the game with a couple of pages for other sports, local television channels and radio stations running non-stop football coverage and of course the likes of Sky Sports Italia and its rolling 24-hour news service.

It is great for the fan and in general the top players cope with it by shutting themselves off from the rest of the world, unless their sponsor or club green-light an interview. But Balotelli isn’t one for the quiet life.

Mario’s ever-present agent Rino Raiola has shielded his client from saying too much, but he couldn’t stop a report - since denied - that a “baby-sitter”, who also happened to be a former policeman implicated in the G8 riots in Genoa, had been employed to look after the forward.

Milan had been willing to turn a blind eye to some of Balotelli’s excesses when it came to his dress sense, ever-changing hair-styles and refusal to turn up to training in a car manufactured by one of the club’s main sponsors.

However, little-by-little, the feeling has been that Balotelli was taking advantage of the club’s good-will, and although his goals helped the club grab third place last season, there has been little sign of the sort of form needed to fill the boots of Zlatan Ibrahimovic.

The return of the golden boy Ricky Kaka, a man who embodies everything Milan expect in a player – clean-cut, polite and a winning smile not to mention a wonderful work ethic - has also taken some of the shine off Balotelli’s star.

When Kaka walked out of the dressing room after Milan’s Champions League match with Barcelona last Tuesday, neatly attired in the club suit and tie, he was followed by Mario dressed like a rapper. Milan have always had a tradition of doing things the correct way, right down to such things as presenting a spotless image to the rest of the world, and the decision was taken to finally rein the striker in.

Former Milan defender Alessandro Nesta recently revealed that he understood he was entering an ultra-professional club when he arrived for his first day at Milanello. Back then, the likes of Paolo Maldini and Alessandro Costacurta would keep everyone in line, but in Balotelli’s case, it was left to Adriano Galliani - with Raiola’s blessing, of course - to lay down the law.

Out would go the Mohawk, the bling and the Ferrari, and in would come a fresh-new look. Balotelli would also move out of his country villa, which had once belonged to Hernan Crespo, and decamp to an apartment in Milan. Not only will this mean he will arrive at training in good time, but he’ll also now be available for meet-and-greets with club sponsors, instead of racing back to his new girlfriend in the depths of the Lombardy countryside.

The new-look Balotelli was unveiled at Parma on Sunday, shaven-headed and looking relaxed. Given this was his first league game back after the aforementioned ban, he knew he had to tread carefully, but if he needed a warning about wasting his talent, all he had to do was look across the halfway line at Antonio Cassano.

At 23, Balotelli still has time to shun the path taken by a player many believe was the most naturally-talented of his generation, but who threw away chance after chance, only to end up in the relative backwater of Parma at the age of 31.

Cassano’s problems have been plentiful, but one of the most reported has been the acid tongue used for putting-down less gifted team-mates, leading him to become an isolated figure wherever he has been.

The fact he played at AS Roma, Real Madrid, AC Milan and Inter as well as Sampdoria only highlights how spectacularly he blew it, but FantAntonio will always point to the fact he has been a maverick and his own man.

The feeling is that Balotelli would like to conform, but has developed a “me against the world” attitude - one not in keeping with reality, given both the Milan and Italy camps want the best for him, and his name gets the biggest cheer from the Rossoneri fans.

A new-look or not, there is no doubt Balotelli still has work to do; there was little complaint when Massimiliano Allegri replaced him for the first time before the hour-mark against Parma, despite the fact Milan were trailing 2-0 and in need of an attacking threat.

Up until that point he had done little but get booked for diving and argue with the referee in a manner that would otherwise eventually have led to a second yellow. Without their star man, Milan did produce a spirited comeback, with Balo’s replacement Alessandro Matri scoring the equaliser. Yet Parma’s Marco Parolo scored a late winner.

Cassano also got on the scoresheet and played without a care in world. No doubt Balotelli would love to be in the same position, but it seems it will take more than just a superficial makeover to turn Mario’s world around.