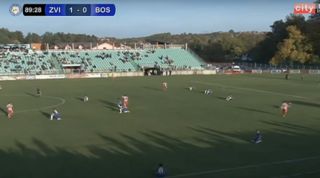 Bosnian second-tier high-fliers Zvijezda were 1-0 up until the 88th minute, but the game quickly descended into farce when one of their players went down injured with cramp just inches away from the touchline, but stayed on-field to wind down the clock.

With frustration eminent among the Bosna Visoko ranks, their players collectively decided to sit down in protest.

The problem? The game carried on around them regardless. Rather than playing among themselves for a bit, though, ruthless hosts Zvijezda carried on to score another two goals and ensure the contest ended 3-0.