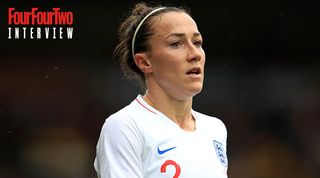 French magazine France Football have been honouring the best male player in the game every year since 1956. Sir Stanley Matthews was the first winner of the prize, aged 41, while Lionel Messi and Cristiano Ronaldo had dominated for the last decade until Luka Modric knocked them off their perch in 2018.

Now the top female footballer of the past 12 months has been recognised too, with Lyon and Norway striker Ada Hegerberg topping the 15-player vote after a brilliant 2017/18 in which she scored 15 Champions League goals and another 31 in France’s top flight.

Bronze believes a Women’s Ballon d’Or should have been set up several years ago, but adds that she’d rather win the World Cup with England over any individual accolade.

Speaking exclusively in the January 2019 issue of FourFourTwo, out now, the former Liverpool and Manchester City full-back says: “It’s long overdue. I’m surprised it wasn’t put in place four or five years ago. So many other organisations already celebrate women’s football.

“We’re not trying to compare it to the men’s awards, but we want to be able to celebrate the best players. Now that it’s here, all we can do is be happy we’ve got it. Would I like another individual trophy? Not really. I just want the World Cup!”

Having dropped only two points in qualifying, the Lionesses head to next summer’s finals in France hoping to better their bronze medal finish in Canada four years ago.

Bronze is confident that Phil Neville’s side have the belief and ability to go all the way.

“I think we’ve got a really good chance,” she says. “We’re good enough on our day to beat any team in the world. Over the next six or seven months, we need to push ourselves to be the best players we can be, then do it on a big stage.

“Going into the last World Cup there weren’t any external expectations on us, but it’s different now. We’ve spoken about winning the World Cup and we’ve moved up the rankings. We’re different players, facing different pressures, but we know how to deal with them. We’ve won a knockout game now. We’d never beaten Germany before, but now we have. We’d never beaten France before, and we’ve also done that.

“Learning to overcome those mental blocks is definitely something we can take into the tournament. We can change the stigmas. We don’t want people saying, ‘England have never reached a World Cup final’. We can change that if we put our minds to it.”

Read the full interview with Lucy Bronze in the January 2019 issue of FourFourTwo magazine. The 2018 awards special features interviews with Goal of the Year winner Gareth Bale and Man of the Year David Silva, and speaks to Ivan Perisic about Croatia’s World Cup heroics. Plus, we go One-on-One with Michael Carrick, and hail Gareth Southgate, Virgil van Dijk and Comeback of the Year winner Hardlife Zvirekwi, who returned to action despite having his left hand amputated.