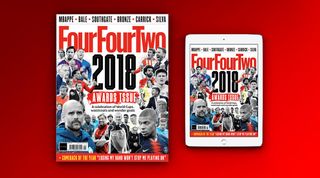 Life's never dull at FFT and 2018 has been case in point. We travelled far and wide to bring you the best stories and biggest names, occasionally putting ourselves in harm’s way in the process.

We went to Israel to watch one of the country’s most heated matches, listened to Milan manager Gennaro Gattuso recount the time he stabbed a team-mate with a fork, and risked life and limb by heading to Belgian club OH Leuven to talk ostriches with Nigel Pearson.

We also asked Mohamed Salah to pose with a crown (before his now famous chant had caught on), Glenn Murray to pretend he was being attacked by seagulls, and Nigel de Jong to play along with a gag about his nickname and ride around on a toy lawnmower.

And, of course, we enjoyed a World Cup where two of this year’s cover stars, Harry Kane and Kylian Mbappe, shone. What a year it’s been... time to relive it with some of the star performers. Enjoy!

Manager of the Year

Gareth Southgate’s appointment as England manager two years ago was deemed underwhelming by many, but now he’s made the Three Lions whole again.

Superstar of the Year

Most starlets would see winning the World Cup as a good time to sit back and take stock, but French glory in Russia has only made Kylian Mbappe even hungrier. Bad news for the rest of the world, then.

Goal of the Year

Everyone remembers where they were when Gareth Bale lit up May’s Champions League final. It might not have won FIFA’s award for 2018’s best goal, but it certainly won ours...

Signing of the Year

When Virgil van Dijk made his megabucks move to Liverpool, many doubted he’d live up to the price tag. But years of knockbacks and personal struggle mean he’s used to silencing the doubters.

Man of the Year

David Silva played a crucial role as Manchester City waltzed to their third Premier League title in 2018 – not that matters on the pitch were the pass master’s main concern.

English Player of the Year

Sure, Harry Kane won the World Cup Golden Boot, Raheem Sterling was superb in Man City’s evisceration of the Premier League and Fran Kirby did the Double with Chelsea, but Lucy Bronze... well, just look at that checklist. Now, Lyon's star right-back has the 2019 World Cup in her sights.

Fans of the Year

Underdogs of the Year

It's been a busy year for Ivan Perisic. Not only has the winger propelled Inter back into the Champions League, he also helped fire Croatia to the World Cup final – crushing English dreams – after turning down Manchester United.

Crisis club of the Year

Four managers, one cup final defeat and a terrifying training ground riot that led to several star players terminating their contracts – it hasn’t exactly been a stellar year for Sporting...

The former West Ham, Spurs and Manchester United midfielder reveals how close he came to joining Arsenal, what went wrong for David Moyes, and if he should have earned more England caps...

Portsmouth had been battered during the Second World War, but its football team offered locals respite by upsetting the established order and securing successive league titles under the watchful eye of club president Field Marshal Montgomery. Plus, we discover what happened to Niall Quinn, learn why the Yanks are to thank for league competition, and showcase classic Derby programmes.