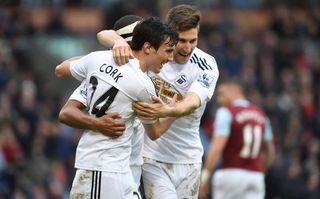 Kieran Trippier's own goal consigned Burnley to a sixth league defeat of the season at Turf Moor, as Swansea hit the 40-point mark.

Jack Cork's effort was kept out by a superb Tom Heaton save, but the rebound cannoned off Trippier and over the goal-line.

The Clarets had carved out more opportunities (13 to the Swans' 8) and played more football in the attacking third of the pitch (completing 53 passes to the Welsh outfit's 49) but were left disappointed as Ashley Barnes failed to find the net with any of his 4 attempts. Burnley remain mired in the bottom three, with QPR just above them on goal difference with a game in hand.