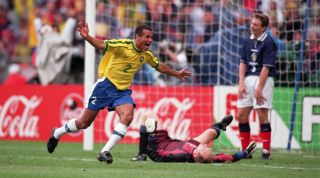 It was the first leg of the Paulista state championship final, just one week before we beat Barcelona 2-1 in Japan to win the Intercontinental Cup. We won 4-2, I scored a screamer and played a part in every Sao Paulo goal. In that match we realised we didn’t have to be afraid of anyone [Sao Paulo won the second leg 2-1 after beating Barcelona]. The winning streak only ended in 1994.

This was one of my greatest matches in Brazil. I scored, too. That Palmeiras team had Rivaldo, Djalminha, [Roque] Junior... I’d meet many of them in the Selecao as well. That team was unstoppable. We scored a hundred goals in less than six months. Memorable times.

That was my first and only World Cup goal! Well, kind of... I had some Scottish help in scoring that one [Cafu’s shot hit goalkeeper Jim Leighton, bounced out onto Tom Boyd’s shoulder and rebounded in for an own goal]. But it was magical for me to have my name on the scoreboard. It was different to the 1994 World Cup, too, because I was more important to the team.

After winning this match we were sure we were going to be Italian champions. It was also the match with my most memorable moment: a triple sombrero over the great Pavel Nedved, one of the best players in the world.

Everyone talks about the World Cup final, but this match was even more tense. I also played better in the game against Turkey. We’d had a very tough game against them in the group stage, but we weren’t favourites to win the tournament then; the semi-final was a totally different business.

It was just a friendly, but it was memorable. Jose Mourinho was beginning at Chelsea and I was finding my place at Milan. I scored and made an assist. After the match, he shook my hand and told me to run less against his team! I knew at that moment that I still had a lot more I could do in football.

This feature originally appeared in the January 2016 issue of FourFourTwo. Subscribe!