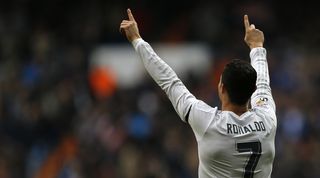 The faux-sweat bead of water was finally holding firm on Cristiano Ronaldo’s torso, that rippled and gurgled like a Welsh mountain range. “Finally,” thought the photographer. “The perfect shot, for the most perfect specimen of a human being who has ever existed. And ever will.”

The overwhelmed artiste, clutching the camera and trying their damnedest not to tremble, knew that a professional distance had to be kept with the subject. That was rule No.1. Boundaries had to be maintained. But those boundaries felt like prison bars when gazing at the eyes, cheekbones, chest… every single part of the Real Madrid player.

Suddenly, a shrill of the subject’s mobile phone shattered the silence and broke the sexual tension that hung heavy in the air of the Madrid mansion. A message had arrived. The message was read. The session was over. Ronaldo sighed as he put down his selfie stick. The water droplet fell to the floor. Real Madrid needed him.

An inopportune injury to Gareth Bale, just as the Welshman was on a hot streak of form, meant that Ronaldo was now being called into action to redouble his efforts for the team and redouble his goal tally, which had been less effusive than usual. Indeed, a knock to Karim Benzema and James Rodríguez being in the new manager’s bad books had Cristiano wondering if he would be carrying the team on his muscular back again.

Ronaldo smiled at the thought. The Real Madrid supporters may never truly offer him unconditional love, but there was one person in the room who more than made up for that lack of affection. Cristiano liked scoring goals. That meant he could do his special celebration, the one that Leo Messi could not even begin to attempt.

The Madrid man was disappointed, though, that his Colombian team-mate was down in the doldrums. James had been useful in the past but not overly handsome. The perfect mix. An incident with the traffic police, playing rubbish and not warming up hard enough during the Sporting clash meant that the South American was set to spend more time on the bench.

But a hamstring twang for Bale had probably changed all that. James would be back. Then again, you never knew with Boss Zizou, a French enigma wrapped in the body of a frowning monk.

Not wanting to raise a ripple in the Real Madrid timestream meant that Ronaldo had been diplomatic about the departure of Rafa Benítez, a manager who only seemed to have time for a certain Welshman. He had told the press that the attitude of the players had changed with the arrival of Zidane, but that he did not know why. He did really. Ronaldo just hoped now that he would not be left behind with the new boss favouring a certain French forward.

With all these thoughts buzzing around the Portuguese poacher’s angular head, Ronaldo packed his training bag. He looked back wistfully at the bubble bath that had been provided for the second part of his photoshoot. The Brian Blessed ‘Prince Vultan’ outfit lay untouched in its wrapping. There would be time for more selfie sessions later. Ronaldo now had to get back to doing what he does best. Well, second best perhaps.