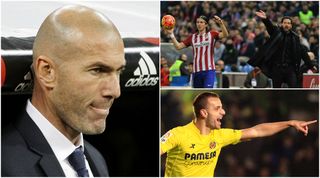 1. Is the league made for an Atlético win?

With half of the season gone Atlético Madrid are back at the top of La Liga for the first time since 2014. Their resurgence has supporters speculating about another year of glory, and they may just be onto something.

A few years ago it regularly took around 100 points to win La Liga. For a side of Atlético’s limitations, that was impossible to match. It’s no coincidence that when they pulled off the shock of the decade by winning the league in 2014, they did so with 90 points: the lowest winning total since 2009.

To win the league again, Atleti will likely require another low-tally season, and that’s why this year is so compelling. The maximum points the team at the top of the league can take at the halfway stage is 45, a number that would only be reached if Barcelona win their game in hand.

Otherwise, the half-time tally at the top will be 44. Either number would provide the lowest points tally for 'winter champions' in years: Real Madrid had 48 last season, Gerardo Martino’s Barça 50 the year before, and Tito Vilanova’s Blaugrana side a whopping 55 three seasons ago.

With the bigger sides dropping an unusually large number of points so far, could Atleti have the perfect conditions for another trophy win? Anything could happen between now and May, but right now the omens are good for Diego Simeone.

2. Does Zidane have the tactical ability?

Zinedine Zidane’s reign as Real Madrid coach started emphatically with a 5-0 win over Deportivo at the Santiago Bernabéu, but the Frenchman will face much tougher challenges in the near future, and it will be intriguing to see if he has the skill as a coach to outthink his two big rivals for the La Liga crown.

Zidane’s time as Real Madrid Castilla boss wasn’t marked by any obvious signs of a world-class coach. His methods focused more on ensuring intensity off the ball then encouraging individualism from the best players on it, rather than any great deal of detail and intervention. In the lower leagues, with the highest budget in the third tier, Zizou could get away with that. Against the likes of Diego Simeone and Luis Enrique, he may need a more skilled hand.

Does Zidane have the capacity to out-think not only the Atleti and Barça bosses, but also the other proven, skilled coaches competing in La Liga? We’re about to find out.

3. Are Celta about to burn out?

When Luis Enrique took Celta Vigo to ninth place in 2014 it proved to be both a blessing and a curse, as Barcelona immediately seized the coach. Celta were spot on when choosing a replacement, however, with Argentine Eduardo Berizzo not only improving on his predecessor’s results but also improving his football, maintaining the same intensity while adding a more developed passing side to their game.

For much of this season, Berizzo’s development continued at a rapid pace. In all but one of the first 17 rounds of La Liga, Celta held a position in the top four, with unstoppable strike duo Iago Aspas and Nolito helping them to pull off spectacular wins over Sevilla, Villarreal and Barcelona. Supporters were in heaven: could the Euro Celta days of old be coming back to Vigo, after almost a decade of only domestic competition?

Events since the turn of the year suggest that will be complicated. Christmas dealt the club a double blow when key midfielder Augusto Fernández left for Atlético Madrid, and talisman Nolito hurt his hamstring. By losing the three games he's missed through injury, Celta have dropped out of the top four, and are hanging onto a Europa League spot by a thread. Are they about to burn out and see their hopes of a dream season collapse, or, can the likes of U21 European champion John Guidetti step up and help them push on?

4. Will Luis Enrique get extra striker he’s begging for?

After 18 rounds of La Liga, Lionel Messi, Neymar and Luis Suarez have scored 39 league goals between them, an incredible return that will thrill their coach. What won’t thrill him so much is Barça’s lack of goals from elsewhere: aside from the Blaugrana’s starting front three, the club’s next-highest goalscorers in the league are all tied on one measly goal each. That’s a potential problem.

If Barça want to maximise their chances of winning the league, they need a wider spread of goals. At the moment that isn’t happening, with the current squad on course to fall well short of the 16 league goals Pedro, Ivan Rakitic and Gerard Pique scored between them last year. For precisely that reason, Luis Enrique is desperate to sign Nolito from Celta. The former Barça B man is in brilliant form, having scored against the likes of Sevilla, Barça, Villarreal and Real Madrid in 2015/16. Bringing him in could add potentially definitive depth of striking quality for Barça.

Not so long ago Villarreal were a staple of the Champions League. Winning over neutrals with their attacking outlook, the Yellow Submarine came within a whisker of the final in 2006 and made it to the quarter-finals in 2009. Their last foray into the competition in 2012 was not a happy one, however, coinciding with relegation to the Segunda Division for the first time since 2000.

Villarreal bounced back, and they bounced high, making an immediate return to La Liga and twice placing in European positions. A return to the Champions League is the only piece missing from the puzzle, and it’s on the brink of being delivered. Eight points clear of their nearest rivals for fourth place, Marcelino’s team are on a six-game winning streak that includes beating Valencia and Real Madrid. Not bad.

At the moment their fast, one-touch counter-attacking game is proving difficult to stop, with players like Denis Suárez, Roberto Soldado and Bruno Soriano producing exceptional performances on a weekly basis. Can they maintain those levels while balancing a Europa League run? It would be a just reward for the patient, long-term project the club have stuck to in the last four years.