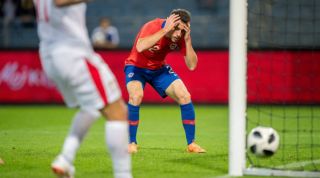 Serbia's World Cup preparations took a blow in Graz as Chile, who failed to qualify for Russia, defeated them 1-0 thanks to Guillermo Maripan's 88th-minute header.

Chile, however, could have broken the deadlock 14 minutes earlier if Henriquez hadn't fluffed his lines.

Junior Fernandes's square pass was begging for a simple finish, but substitute Henriquez failed to convert after a hideous mishit.

The 24-year-old also missed a one-on-one to cap a miserable performance.

Henriquez now plays for Liga MX side Atlas following loan spells at Wigan, Real Zaragoza and three seasons at Dynamo Zagreb. Before the game, he had told Chilean radio station ADN that he hoped to return to Europe one day. This probably hasn't done him too many favours.