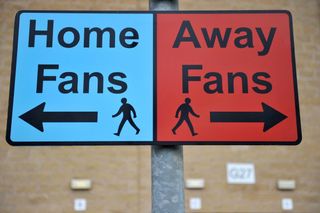 Coventry has seen horror and glory, but it won't see football this season. Layth Yousif looks at the past, present and future of a proud West Midlands city and club

A crisp early November night in 1970. Coventry City are taking on mighty Bayern Munich at Highfield Road - their atmospheric and beloved home ground since 1899. Goals from John O'Rourke and Neil Martin help the Sky Blues win 2-1 on the night in the Inter Cities Fairs Cup.

Nobody much cares that the first leg had ended in a 6-1 victory for Bayern. They have come to see their heroes - Willie Carr, Ernie Hunt, Mick Coop and the rest - face the mighty Germans. Having finished sixth in the First Division playing progressive football under Noel Cantwell, the team are looking toward the stars. The programme for the night calls itself the European Sky Blue.

Early in the heady summer of 1967, Coventry City had reached the top division for the very first time. They had done it in style, as champions, and set their record attendance - officially recorded as 51,455, although contemporary accounts suggest there were as many as 60,000 against eventual runners-up Wolves.

The optimism that November was palpable. Not for progression in the tournament, as nobody expected a six-goal swing in the second leg, but in hope for the progress of the club. Certainly when you consider what the city had to contend with far different German opponents 30 short years before.

A clear cold early November night in 1940. The RAF have just bombed Munich, the birthplace of the Nazi party, and Hitler seeks immediate, terrible revenge. Under Operation Moonlight Sonata, 515 German bombers form the biggest raid of the war to date, targeting an industrial city at the beating heart of Britain''s war effort: Coventry.

From 7.30pm onwards, the Luftwaffe hit Coventry with everything it could muster: 500 tonnes of ordnance, both explosive and incendiary. Among the buildings hit was the 14th-century cathedral. Despite the desperate attention of firemen and civilians, it burned to the ground, leaving only a hollow shell.

As the raid progressed, 200 fires merged into one fearful burning hell. Flames leapt 100 feet in the air, and it's said that bombers 150 miles away used the light as a beacon to guide their way in. Attacking in multiple small waves, the bombers would double back to France to rearm and return with more payloads. The all-clear didn't sound until 6.15am, almost 11 hours after the first attack.

Amid the ruins lay the dead - more than 500 men, women and children. Using 36,000 incendiaries, 500 tonness of high explosive, 50 parachuted air-mines and 20 petrol-mines, the attack had laid waste to 4,300 homes, around two-thirds of the city's buildings, and practically all the gas and water supplies. The raid was so destructive that Joseph Goebbels used the term Coventriert ('Coventried') when describing such levels of obliteration.

Yet the people of Coventry did not give in: they rallied in the aftermath. The city mourned with quiet dignity. Unlike the aftermath of many bombings, not one incidence of looting was reported. Neighbours who had lost loved ones, houses and pets gave succour to those who had lost even more, working day and night to help each other. They had a unity and a common purpose: the love of their city. Canteens were set up and the Royal Engineers restored electricity within 72 hours. Water and gas supplies resumed soon after.

These people were simply not going to be defeated. They even collected the nails and melted metal from the ruined cathedral, made them into a cross of remembrance and placed it in the new cathedral; consecrated in 1962, the bold modernist structure of St Michael's incorporates the skeleton of the original wreckage as a memorial garden. The people of Coventry were proud of their city.

From Blitz to bliss: May 1987. A quarter of a million people throng in the centre of Coventry. The area where German bombs once rained down is now a joyful mass of Sky Blue. Old men who lived through the Luftwaffe attack have moist eyes and young children with wide grins now have stories of their own to tell their grandchildren: the day Coventry City won the FA Cup.

A bus commandeered from the local transport museum is painted sky blue. The club's players, fans and officials have barely slept due to their celebrations. The city is animated. Even the few of its citizens who do not like football are pleased for the civic pride the unexpected victory provides. The city is happy. The city is proud.

The dilettantes of Tottenham with their fancy ways stood not a chance against the pride and team spirit of the underdogs from the unsung West Midlands. Their commitment was not only testament to their character but an intuitive honouring of the Coventry Blitz spirit and the heroes who lived and died in the worst day in the city's long existence.

BBC commentator John Motson had called it 'the finest Cup Final I've had the pleasure of commentating on'. Coventry were definitely the underdogs: Tottenham had finished third in the league, with an attacking five-man midfield including Glenn Hoddle, Chris Waddle and Ossie Ardiles feeding 48-goal Clive Allen.

Allen's 49th of the season put Spurs in front after only two minutes, but Coventry quickly equalised through Dave Bennett. Gary Mabbutt put Spurs back in front before half-time, but just after the hour Bennett crossed for Keith Houchen to enter history with a magnificent horizontal headed equaliser.

Early in extra time, Mabbutt scored his second of the day. Fortunately for Coventry and lovers of the underdog everywhere, it was into his own net. Coventry City had triumphed: the loveable unassuming little guy had won the FA Cup.

Tottenham had already booked the celebration route; the inevitable Chas & Dave Cup Final single included the line "seven times we won the cup, now number eight is coming up". But it wasn't. Coventry won an enthralling final, helped by a glorious, improbably balletic diving header from a footballing journeyman who had previously played for Hartlepool, Orient, York and Scunthorpe.

Indefatigable Coventry City had refused to give up under what could have been seen as insurmountable odds. It was a fitting metaphor to a brave city.

July 2013. After a long-running rent dispute between Arena Coventry Ltd (ACL), owners of the Ricoh Arena to which Coventry City had relocated in 2005, and Sisu, the football club owners since 2007, the Sky Blues announce they are set to play their home matches for the next three seasons at Northampton - 34 miles away.

Coventry's Sixfields groundshare has been "reluctantly approved" by the Football League, whose chairman Greg Clarke hopes City can resolve the long-running row with the landlords. "The board did not take this decision lightly," says Clarke. "It remains a matter of deep regret that the two parties involved cannot come to an agreement."

The club had put itself into administration in March after being taken to court to face an administration order from ACL over unpaid rent of £1.3m. The club is now owned by administrators' preferred bidder Otium Entertainment Group - founded by three former Coventry board members, all of whom have connections with Sisu - but with ACL rejecting a Company Voluntary Agreement, Coventry City FC Ltd faces possible liquidation. Moreover, on the field the club will have to accept a 10-point penalty.

Amid the administration and uncertainty, the club's long-suffering fans would much rather City stay in Coventry. "The whole city is against this," says Steve McCairns, a season ticket holder for 25 years. "I can't believe what is happening to my club. It seems like a bad dream. A lot of people will boycott the move on principle. I am a loyal supporter but what is going on is simply unacceptable - it's a disaster for the club and a disaster for the fans. Nothing good ever comes out of groundsharing: ask Brighton or Wimbledon fans."

As the idolised FA Cup-winning manager John Sillett puts it, "The people of Coventry don't deserve a 70-mile round trip for home games." Polling their members, the Sky Blues Trust found 98% were against the move.

As ever, the people of Coventry have mobilised. The "Not One Penny More" campaign insists fans shouldn't go to Northampton or buy any club merchandise while the team is in exile; instead of attending Sunday's first Sixfields game against Bristol City, they are urging fans to attend a charity friendly at the Ricoh between Coventry City Legends and Midlands All Stars.

As the legendary Sillett said with a heavy heart at what is happening to his beloved club: "I've never seen a set-up like what's going on at Coventry at the moment. How these people couldn't get together and sort out such a wonderful stadium as the Ricoh...

"One of my fondest memories is of returning to Coventry after winning the Cup Final... Seeing faces that were so happy and so proud... and to think what they must be thinking now, sitting there like I am, in tears for what's going on at that football club."

Some fear that Coventry City FC, a proud name in the English football since its inception 130 years ago, is in real danger of dying. But even in a time of such worry, it is worth remembering the brave words of a wise man when Coventry faced a very different despair:

"Remember the eyes of millions are upon you at this time. I wish I could show you the hundreds of letters I am receiving from all over the country asking me to express to you admiration and trust. We must not disappoint those hopes and we shall not.

"We must try not to dwell too much on what we have lost but to turn our thoughts and hands to the tasks we can do for the sake of our city... it rests with us whether they shall break our spirit... in this city we have been better friends and neighbours than we ever have before... because we have suffered too much together."

So said the Bishop of Coventry, Dr Mervyn Haigh, at a mass funeral for Coventry citizens in November 1940. That was the city's darkest hour, and it rose again. Football fans everywhere should hope that Coventry City can one day contentedly come back together in a city full of pride.

Also by Layth:
Gedion Zelalem: Why Arsenal's 'New Cesc' will have to waitTriumphs, bitter defeats and curiosities: Heynckes, Bayern and the Foals
Eastern Europe, expatriation and rebirth: The strange story of Newport County