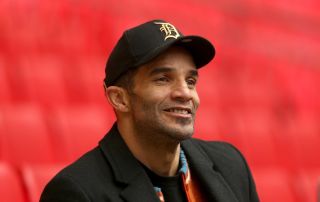 David James says more data is required to understand whether coaches from ethnic minorities are being given a fair crack at jobs in English football.

Only five of the 91 clubs in the Premier League and Football League currently have a manager from a black, Asian or minority ethnic background, and some have questioned whether coaches from ethnic minorities are being given an equal opportunity.

James has expressed an interest in becoming a manager in England after two spells with Indian side Kerala Blasters, having also secured his UEFA Pro Licence coaching qualification in 2018.

The former England goalkeeper would like to see more BAME coaches involved at the top level, but says that more statistics are required to fully understand why that is not already the case.

“When it comes to coaching, there’s a lot of information which isn’t available for different reasons, one of them being it hasn’t been collated,” the 49-year-old told FFT. “I did ask the question when I did my Pro Licence - because in order to manage or even coach in the Premier League, or at a professional football club, you have to have passed certain qualifications.

“The question I asked was: did anyone know the information on how many ethnic minority coaches have actually taken the qualifications and how many of them have actually passed? It’s easy to say we should have more of this or more of that, but if they haven’t qualified then they’re unavailable to be put in that position.

“I do like statistics - from the last look at the Office For National Statistics, there are around 15% of people in the UK who are non-white. In which case, to have equality in a statistical sense would mean we should have around 15% representation in management, coaching, playing. So do the statistics reflect what we are as an equal opportunities country?

“Two years ago, I did ask the FA for that info, but no one has actually collated that kind of information. It wouldn’t have been a concern of mine, because I’ve been on these coaching license courses and I haven't seen the kind of numbers that would reflect these national averages - as in 15% of guys being from ethnic backgrounds.

“But at the same time, we only have 91 or 92 teams in the league, which isn’t a lot. I’d imagine there are 4,000 or 5,000 who have qualified with the licence, so there are plenty of qualified coaches ready to take these positions. Whenever a job comes up, from what I’ve heard from guys who are looking for jobs, there will be 100-plus applications put in straight away for every job, at every level. There is such a demand to get into the game.

“It’s a difficult situation. A simple observation is yes, I would like to see more equality. But there has to be a reason why the situation is the way that it is. If you look in the NFL, they introduced the Rooney Rule, which was a step forward, and more black coaches got opportunities to get into the interview room.

“The process in the UK isn’t the same, not that I’ve applied for too many jobs in the UK. The positions are normally filled before candidates have the chance to put their applications in anyway. The nature of the game is usually lining someone up before they get the sack in.

“Looking to implement these kinds of rulings, there’s a question of how productive they’d actually be. My recommendation, if anything is player-led rather than authority-led or association-led, is that if BAME coaches and players want to become managers, then they have to go through the process of getting licences. Once they’ve done that, and there’s data that can prove there is or isn’t a problem, then the industry could take a look at it.”

James believes that the number of foreign coaches in the Premier League has also made it more difficult for English managers of any background.

“When I passed my Pro Licence, I did my own study into how to become an English manager in the Premier League, and there’s not that many ways of actually achieving that goal,” he says. “The easiest way was to get promoted with a side as an English manager.

“In the top flight in English football, and arguably going further down the ladder, it’s become almost exclusively foreign. If you’re a foreign owner, the suggestion is you’ve got the whole world to look at with regards to who’s going to be your manager - and if you’re successful, you’ve got more money to spend.

“As great as English football and the Premier League is, we are a small island and there are many more managers outside of England than there are in it.

“The point being that especially in the Premier League, the world is their oyster with regard to recruiting managers. I don’t think it’s anything to do with systemic racism, it’s just that the best managers tend to be foreign and few of them tend to be from an ethnic minority.”

James would like to see more equality in other areas, too. “The one area that always surprises me with regard to inequality is football journalists,” he says. “I was invited to a football writers’ awards do many years ago, and the stand-up comic was Warren Mitchell. He wasn’t in his Alf Garnett costume but he was talking like Alf Garnett and I actually walked out. These were football writers, and this guy was being racist.”

James departed his role as Kerala Blasters boss in December 2018, after an 11-match winless run, and says that ultimately all decisions must be taken based on that person’s managerial skills.

“It all boils back to one point - in the end there has to be an ability evaluation,” he says. “There’s no point giving people jobs who aren’t good enough for the job. If the guy’s good enough, they should get the job.

“As a manager who was asked to leave in India, I know what that feels like, but our record supported it at the time. There are contributing factors but the numbers weren’t working, and you part company.”

David James has designed a pin badge as part of #PinYourThanks, a volunteer-led, charitable UK initiative allowing people across the UK to give a heartfelt thanks, in the form of a beautiful pin badge, to those who have supported them during this challenging time. The collection includes unique designs from Keira Knightley, Ringo Starr, Joe Lycett, David James MBE, Dame Sarah Storey, Anoushka Shankar, and artist Ian Berry, as well as a special in-house designed pin badge (‘The Original’). Profits from the scheme go to Volunteering Matters and NHS Charities Together. Visit pinyourthanks.org

While you’re here, why not subscribe to the mag – just £9.99 for the first six months, over £38 cheaper than buying it in the shops!

QUIZ Can you name every country to compete at a FIFA World Cup?