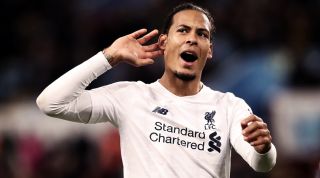 Some years, the Footballer of the Year is such a clear cut that it’s barely worth holding a vote. This year has not been one of those seasons, though, with half-a-dozen players who would be worthy winners.

Liverpool’s excellence has both simplified and complicated the issue. Their football has often belonged to a different stratosphere, creating a clear separation between them and the rest, but – simultaneously – it has also built the individual cases of all sorts of players, in many different areas of the pitch.

What makes a Footballer of the Year is also a very good question. As time passes, these awards tend to become more literal, providing less room for voter interpretation. Not without due cause, either, because the lives of the players and the public don’t overlap as they once did, meaning that the basis for judgement generally exists solely on the pitch.

2020 has not been that kind of year. Instead, the last few months has endowed English football with a political authority it was presumed not to have. That was reckless and wrong, and those who have done the disproving would be worthy additions to anyone’s ballot. Marcus Rashford and Jordan Henderson, for instance, have made an impact which will transcend the pandemic, and one which – hopefully – will be felt and replicated for many years to come.

So, should social responsibility and influence factor into something like Footballer of the Year? Of course. It’s rare and special and deserves to be rewarded. It also makes this year’s vote one of the most subjective in memory; there is no ‘right’ answer.

But here’s the case for my vote, Virgil van Dijk.

The starting point is to say that he is the very best player in the world in his position. Also, that there is a significant gap between him and whoever is in second place. Who would that even be? Actually, perhaps that’s one of the subtle measures of van Dijk’s standing in the game: there isn’t even a conversation about his peers. It’s him in the foreground, with his positional rivals huddled in the shadows behind.

Another way to chart his influence is through the abstract. It’s by noting that the line-up Liverpool have typically used this season has been very attacking and that, despite that, Jurgen Klopp’s players will likely finish the year have conceded fewer goals than any other side in the Premier League.

Van Dijk is surrounded by attack-minded players. The full-backs either side of him are very offensive, his goalkeeper is aggressive, and the midfield which protects his department may not be imbalanced, but neither is it equipped with a specialist ball-winner. While those ratios may no longer be unusual in European football – the idea of a ball-winner is admittedly arcane – they, in concert with Liverpool’s defensive performance statistically, still frame van Dijk’s influence in a compelling and flattering way.

What would happen if he wasn’t there? If every other part of the side remained equal and another centre-half was dropped into his place? Nothing good, most likely, and that’s the heart of the argument. Klopp would miss any of his first-team players. Liverpool have also won the title by such a distance that it’s just not credible to claim that one player alone has been the difference between their finishing first and second. What can be said, however, is that the removal of van Dijk would probably create the biggest difference between what they are and what they would otherwise be. He would be the basis for the greatest disparity.

PREMIER LEAGUE Can Arsenal end Liverpool's hopes of a new points record? 8 things to look out for in the Premier League this week

Whether that can be measured in a tangible way is doubtful – ‘with and without’ tables are notoriously disingenuous – but anecdotally it seems to stack up, because so much of what makes Klopp’s side great can be traced back to his centre-half.

How would Trent Alexander-Arnold have adapted to first-team football if there had been a different defender inside him? If that had been the case, would his playmaking ability have been given the stage it has, or would we instead be fixated on the weaker parts of his game? He’s a very free footballer, almost completely uninhibited, and that’s a product of conditions which have been created by others.

It’s a tenuous logic and it’s not intended to detract from anything Alexander-Arnold has achieved, but it has to be relevant in this kind of discussion.

Similarly, would the chemistry of that midfield be quite right without the assuredness that van Dijk behind it? Would Jordan Henderson’s rise have happened if he, Fabinho, and Georginio Wijnaldum had been working from a different base and had the heart of Liverpool’s defence needed greater protection?

These are questions without answers to an extent, and all points which have arguments for and against. Instead, then, maybe van Dijk’s credentials are best measured by how you – probably a supporter of another team – view Liverpool as a result of him being in their side.

Without him they’re vulnerable, with him they’re not. That’s the perception, at least. When he’s not on the pitch, at Anfield or otherwise, there are avenues to explore in that backline and gaps to attack. Even for teams without the players to exploit those opportunities properly, there’s always the hope of a muddle at a corner or a missed marking assignment at a free-kick.

Liverpool have other players like that – others who change the internal calculation rival fans make before kick-off – but not quite in the same way. They’d prefer not to face Sadio Mane, Mohamed Salah and Roberto Firmino, and they’d definitely rather see Klopp’s team when his full-back tandem has been disrupted. When Alisson’s name isn’t on the teamsheet that’s also a reason for encouragement.

But nobody dampens that morale quite like van Dijk. Nobody makes the prospect of facing this Liverpool team seem quite so hopeless and, if that’s the response he’s able to draw from rival fans, then it’s likely one he provokes in opposition players too, and in rival head coaches who know that their very best outcome – even on a good day - is probably a goalless draw.

What a strength that is. The ability to influence a game even before it starts is a worthy trait of any Footballer of the Year.

QUIZ Can you name the clubs with the 30 most expensive squads in the world?