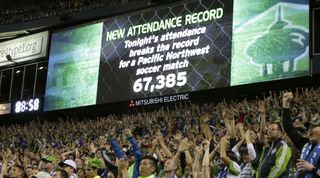 If Clint Dempsey thought that the 67,385 supporters present at his Seattle Sounders home debut were there to greet him personally, then the former Spurs man would have been quite wrong.

Nearly 70,000 would have come to CenturyLink Field anyway: the accursed Portland Timbers were in town, looking to take down their hipster, coffee-slurping regional rivals.

Any outsiders asked to name the MLS's biggest hotbed of soccer support might not name the Pacific North-West. The barrios of Los Angeles or boroughs of New York would be a more logical choice.

However, it's in the wet and windy climes of Washington State and Oregon that you'll find the beating heart of North American soccer.

The Seattle Sounders are a side in quite the rush. Although the club is only playing in its fifth MLS season, it's already the most popular in terms of matchday attendance. Although the derby is particularly popular, around 40,000 regularly turn up for what could be qualified as less glamorous home matches than the visit of Portland.

“We did have the original NASL here in 1974, so that’s almost 40 years ago,” explains Adrian Hanauer, part-owner and the club’s General Manager. “That was really the foundation for professional soccer fans here.”

The north-western club is well on the way to becoming one of the strongest franchises in the league, elbowing aside the likes of New York Red Bulls and LA Galaxy in the process.

In an ambitious move last January, the club signed Obafemi Martins from La Liga outfit Levante. A few top European sides were after his signature, but the Nigerian bought out his contract with the Spanish side to expedite the transfer to Seattle.

He hasn't regretted it. “I was shocked when I came," the striker tells FourFourTwo. "They have some of the best fans.” He's not wrong, and it's well worth noting that Levante's average 14,000 gate last season is only a third of Seattle's 42,000 so far in 2013 - easily the highest average in the MLS.

The Sounders already had an impressive forward line including US international Eddie Johnson, but the club showed the increasing pull and financial draw of MLS by bringing Clint Dempsey back across the Atlantic after six years away.

Using this wealth of international experience combined with exciting youth talent, the Sounders are well positioned to win the MLS Supporters Shield trophy - awarded not for fan behaviour, but for on-field performance, to the best team of the two conferences combined during the regular season. That would be success in itself - runners-up in 2011, Seattle have never won the Shield - but would also be a fine springboard for the biggest prize in the MLS, the end-of-season play-offs.

Hanauer says that the growth of the club and league can continue, if an ever-improving standard of players lure even more supporters into the ground for games.

“If we can improve our TV contract situation and continue to grow revenue, then we can continue to bring in players closer to the prime of their career,” argues the team’s General Manager. “It’s a fantastic trend that will only make the game more attractive and exciting for our fans."

Obafemi Martins is also hoping to attract new blood to the league, from a source he knows well. “I want the young players in Africa, who want to play in Spain or Italy, to know," he says. "Trust me, they will be surprised, as the league is growing very fast.”

The Nigerian has a dual mentoring role: he is a beacon over the ocean for African players to follow, but also a well-regarded player with rich European experience, hoping to share his knowledge with his new colleagues in the New World.

Hoping to follow Seattle’s progress closely are the Portland Timbers, the madcap, thrilling other half of the North West emergence - not forgetting Vancouver Whitecaps, just over the border in Canada. As you can tell by the Timbers name, this is a club that celebrates its roots, celebrating every home goal with a burly pitchside lumberjack slicing a huge chunk off a log - not something you see every day in Europe.

While they may not match Seattle's crowd numbers, the Timbers supporters certainly make up for it in passion and noise. “If I blindfolded you and dropped you into Portland Timbers stadium, you would swear you were in South America,” claims Phil Rawlins, president and part-owner of third-tier US side Orlando City and a director at English Premier League club Stoke City.

The clashes between the rivals are now among the most eagerly-anticipated MLS matches - for fans and footballers alike. “It’s a proper rivalry," Timbers midfielder Will Johnson tells FourFourTwo. "It's something that we look forward to and one of the big games for the league.”

Although both clubs are fairly new to MLS - Timbers joined in 2011, two years after Seattle - the rivalry is one that goes back to previous incarnations over the decades. “There’s a lot more history than in the other cities,” says Johnson, who had a spell at Blackburn Rovers early in his career before moving on to Chicago Fire, Heerenveen, De Graafschap and Real Salt Lake.

“You have the Sounders that go way back, and the Timbers go back to 1975. It’s a lot of history, but obviously those clubs have only been in the MLS for four or five years. It’s more European.”

The Seattle supporters who were battered by torrential rainstorms during last weekend's 1-1 draw against the New York Red Bulls will be more than familiar with the inclement conditions of the region.

However, no amount of deluges can dampen the enduring enthusiasm and hopes of a region currently leading the boom in North American soccer.