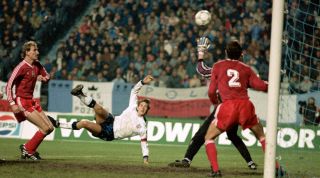 Once again, England are pitted against Poland in a key qualifier. These two nations have frequently crossed paths in the past, and the result is rarely dull...

England and Poland first met in January 1966, with a late header from Bobby Moore earning the hosts a 1-1 draw at Goodison Park. Exactly six months later England travelled to Chorzów for a final pre-tournament friendly, Roger Hunt scoring the only goal, but the first competitive match of this now familiar fixture didn’t arrive until seven years later.

It came, once again, in Chorzów. In those days the European football landscape looked very different. UEFA had just 32 members compared to its 54 today, and tournaments and qualifying groups were much smaller: the Euro '72 and '76 finals featured just four teams, and to get to the 1974 World Cup in West Germany, England needed to navigate their way out of a three-team group containing Poland and Wales. They had already recorded a win and a draw against David Bowen’s side before heading out to Poland.

England wore an unfamiliar yellow kit, but it was anything like watching Brazil. Although Sir Alf Ramsey's side had won the World Cup in 1966 and gone out in the 1970 quarter-finals, they had failed to reach the European Championship in 1972 and their hopes of qualifying for 1974 were handed a setback by a physical Polish side.

Moore was culpable for both goals. First, he swung and missed at a free-kick that allowed Robert Gadocha to give Poland the lead, then dawdled in possession and had his pocket picked by Włodzimierz Lubański, who doubled their advantage. Compounding matters, Alan Ball was sent off for clashing with Lesław Ćmikiewicz.

It was a huge blow – and to date Poland’s only ever victory against England – but going into the final game of Group 5, Ramsey knew that all they had to was win the return fixture at Wembley…

'End of the world'

By the time of the final game in UEFA Group 5, Ramsey was under a great deal of pressure. Since first entering the World Cup in 1950, England had never failed to reach the finals since, and victory over Poland was expected.

The win seemed a foregone conclusion in some quarters. Peter Taylor had described the Poles as “donkeys”, while goalkeeper Jan Tomaszewski was famously dismissed as a “circus clown in gloves” by Brian Clough on television before kick-off. The LKS Lodz shot-stopper would ultimately have the last laugh, though.

Tomaszewski’s goal came under siege from the off but a display ranging from the sublime to the unorthodox, with a hint of good fortune thrown in kept England at bay, but the 25-year-old’s performance is indubitably ingrained in Wembley folklore.

With Tomaszewski keeping them out at one end, the unthinkable happened at the other. Norman Hunter misjudged a challenge on the halfway line 10 minutes after the interval, allowing Grzegorz Lato to scamper down the left wing and feed Jan Domarski, whose low shot squirmed under Peter Shilton’s dive. Allan Clarke’s penalty levelled the match but it was not enough and Poland qualified at England’s expense.

The Sun called it “the end of the world”, and for once the media hype may have been justified. Within six months Ramsey was replaced by Don Revie, but apart from that World Cup in Mexico, England didn't qualify for any tournament during the 1970s. Even when they got to Euro '80 in Italy, Ron Greenwood's side failed to make it out of the group stages.

By contrast, Poland beat both Italy and Argentina on their way to the semi-finals of the 1974 World Cup; although they lost to eventual winners West Germany, they finished third by beating Brazil 1-0 thanks to a goal from Lato, whose seven goals earned him the Golden Shoe.

Revenge served cold in the heat

England had to wait 13 years for revenge. The two countries have been paired together no fewer than eight times down the years in qualification for either the World Cup or European Championship, but after that draw at Wembley they didn’t meet again until the 1986 World Cup in Mexico – their only clash at a finals.

Bobby Robson's England had lost their opening group game against Portugal and then somewhat fortuitously drew with Morocco; little wonder there was a dressing-room revolt. The squad had been unhappy with Robson’s tactics, mainly because playing the full-backs so high up the pitch left the defence exposed and didn’t get the best out of Glenn Hoddle.

After a team meeting, Robson reverted to a flat back four, brought in Trevor Steven and Steve Hodge, and sacrificed Mark Hateley for Peter Beardsley to provide a better partner for Gary Lineker up front.

Ultimately, a draw would have sufficed, but three close-range first-half Lineker finishes gave England a 3-0 victory and a place in the last 16. The Everton centre-forward finished as the tournament’s leading scorer with six goals (and went on to join Terry Venables at Barcelona), but England were knocked out in the quarter-finals by Argentina and that Diego Maradona goal. Despite losing, Poland also reached the last 16 but were thumped 4-0 by Brazil in Guadalajara.

Defenders of the faith

In 1989, England went to Poland and did what they needed. They would reach the semi-finals of the World Cup the following year, but getting there had been far from a straightforward process, despite an unblemished defensive record. In the end, Robson’s side only qualified for Italia '90 as one of the best-placed runners-up. Just like this evening, however, it all came down to the final game against Poland.

England had already beaten them 3-0 at Wembley earlier in the campaign thanks to goals from Lineker, John Barnes and Neil Webb, but travelled to Katowice still needing a point after twice being held by eventual group winners Sweden.

Lineker, who scored six of his 48 international goals against Poland, was kept quiet by the hosts’ defence; instead it was England’s back four, and that impressive defence record, attracting the attention. Poland possessed a quick and mobile forward line that caused centre-backs Des Walker and Terry Butcher all sorts of problems and peppered Peter Shilton’s goal with shots.

England, though, remained resolute and put in a dogged defensive display. It didn’t quite match the heroics of Tomaszewski 16 years earlier but Shilton, aged 40, pulled off a succession of impressive saves and even when he was finally beaten late on Ryszard Tarasiewicz’s fierce drive from 30 yards hit the crossbar.

Fight to the finish

Last-day showdowns against Poland have been something of a regular occurrence down the years. What began with a 1-1 draw at Wembley 40 years ago was the first of (so far) five meetings that concluded England’s qualifying campaigns. The good news for Roy Hodgson is that, aside from 1973, history is on England’s side.

Two years after Bobby Robson got a draw in Katowice, Graham Taylor's England went to Poznań for their final Euro '92 qualification fixture. Group 7 was terrifyingly tight: any one of England, Poland and the Republic of Ireland could still claim top spot and a place in Sweden. Furthermore, Euro '92 – the last eight-team Euro finals – afforded nothing to group runners-up.

Goals from Lineker and Beardsley had given England a 2-0 win at Wembley, but a succession of draws between those top three teams left the group on a knife-edge. Ireland did their bit by winning in Turkey, meaning that once again a draw would do for England.

In the first half Roman Szewczyk’s shot from distance took a deflection off Gary Mabbutt and beat Chris Woods to give Poland the lead – and top spot. England missed chance after chance in the second half but, with qualification slipping away, Lineker – of course – popped up with an acrobatic close-range volley on 77 minutes to gain a valuable point for England.

The finals themselves, were something of a disappointment for England, who finished bottom of Group 1 without winning a game, while Lineker’s international career came to an end after he was substituted against Sweden.

A footnote on the other last-day games against Poland: Another draw against Poland in 1999 was enough to secure safe passage into the play-offs for Euro 2000 after Janusz Wójcik’s side lost to Sweden (see below), while eight years ago the countries concluded their qualifying campaign for the 2006 World Cup at Old Trafford. By then, though, England had already sealed their place in Germany, but a 2-1 win thanks to a late Frank Lampard goal ensured top spot in the group; Poland also qualified as one of the best runners-up.

Glenn Hoddle's England made a stuttering start in their efforts to reach Euro 2000, losing against Sweden and being held at home to Bulgaria before a kickstarting victory over Luxembourg.

But by the time England’s next qualifying matches came around Hoddle had been sacked and replaced by Kevin Keegan, then still in charge of runaway Division Two leaders Fulham. Poland arrived at Wembley with a 100% record but Paul Scholes got the Keegan era off to a winning start.

The Manchester United midfielder clipped in the opener after 10 minutes and then, with a more than a hint of handball, converted David Beckham’s cross 11 minutes later before Jerzy Brzęczek – uncle of Borussia Dortmund star Jakub Błaszczykowski – reduced the arrears.

Eighteen minutes from time Scholes’ firm header completed his hat-trick and sealed the win. It would be his only treble for England, and the last by an England player at the old Wembley.

The rest of the campaign was hardly a formality, though. England once again failed to beat Sweden and Bulgaria – they also drew with Poland in Warsaw in a game which saw David Batty sent off – but it was enough to reach the play-offs, where Scotland awaited. For Poland, the wait to reach the finals of the European Championship went on: it wasn't until Euro 2008 that they at long last made their tournament debut.