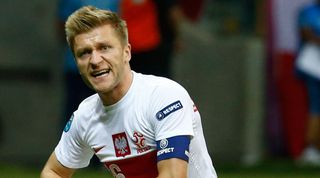 1. One of their greatest ever strikers was branded a traitor

You may remember Oleg Salenko's five goals against Cameroon at World Cup '94 earning him the World Cup record for most individual goals in a game, but it was a Pole whose 56-year record he snatched.

Katowice-born Ernest Wilimowski previously held the honour after netting four times in Poland's 1938 opener against Brazil, also earning a penalty which was converted by team-mate Freidrich Scherfke. But despite his impressive feat he still ended up on the losing side – Brazil eventually pipped the Poles 6-5 after extra time (which you can see in the video below).

Playing 22 games for Poland between 1934 and 1939, the striker who had a sixth “lucky” toe on his right foot netted an impressive 21 goals. His club record during this time was even more notable, with 112 strikes in just 86 appearances for Ruch Hajduk Wielkie (now Ruch Chorzów). This included a staggering 10-goal haul in a 12-1 league victory against Union Touring Łódź, just days before the outbreak of the Second World War.

However, with his home region of Silesia pulled back and forth during the conflict, Wilimowski chose to sign for the German Volksliste and became a citizen of the German Third Reich. While it was much later revealed that by doing so he was able to secure the release of his mother from the Auschwitz Concentration Camp, a combination of fear and pressure from Poland's communist government meant that he was never allowed to return to his home town before his death in 1997, aged 81.

Mention 1973 to an England fan and you'll no doubt be told of Jan “the Clown” Tomaszewski's goalkeeping heroics, and Poland snatching a 1-1 draw at Wembley to progress to the following year's World Cup at the expense of the Three Lions. But it was during the first meeting between the two sides four months earlier where Poland's chances of lifting the World Cup trophy received a massive blow.

When England travelled to the southern industrial city of Chorzów in June 1973, Włodzimierz Lubański was Poland's biggest threat. Having helped Górnik Zabrze to seven league titles and six Polish Cups in 11 years, picking up four Golden Boot awards along the way, it was no surprise that he was singled out as one of the Poles' key players. And when the 23-year-old gambled on Bobby Moore's willingness to hold onto the ball for too long, he was rewarded with a clean run through on goal. He made the most of it too, firing past a helpless Peter Shilton to confirm the White Eagles' 2-0 victory.

But just seven minutes after his decisive strike, a strong challenge from Derby County defender McFarland left the striker sprawled on the Silesian turf. While there was seemingly no malicious intent from the English full-back, Lubański landed awkwardly, tearing a ligament which forced him to miss both the rest of Poland's successful qualifying campaign and subsequent World Cup.

Kazimierz Górski's White Eagles went on to pick up a bronze medal at the tournament, beating Brazil in the third-place play-off. However, it is left only to debate about whether Poland could have progressed further had their star – who remains the country's highest-ever goalscorer - been fit enough to make the trip to West Germany.

3. There's family history in this fixture

With their last trip to face England taking place at Old Trafford, it's now 14 years since the Polish national team last played at Wembley Stadium. There, Paul Scholes' hat-trick condemned the visitors to a 3-1 defeat as Kevin Keegan's side stormed towards Euro 2000.

Poland's captain, Maccabi Haifa midfielder Jerzy Brzęczek, was also the Białe-Orły's lone goalscorer that day. Picking up his 39th international cap, the 28-year-old slotted coolly past David Seaman to bring the Poles back into the game – although piling forward in the search of an equaliser they were caught on the counter, allowing Manchester United midfielder Scholes to head in his third.

Now coach of Polish third-tier club Raków Czestochowa, former captain Brzeczek will not just be patriotically cheering on his country in Tuesday's clash – he will also have personal interest. The man who will lead Poland out at Wembley for the first time since he did in 1999 isn't just his successor, but also his nephew.

Rocked by the murder of his mother back in 1996, a young Jakub Błaszczykowski almost quit football altogether. Fortunately, uncle Jerzy encouraged Kuba to return to the game after the tragedy, paving the way for the glittering career that has followed. Now Błaszczykowski will aim to thank his uncle by not only matching his goal against the Three Lions, but going one better and picking up a historic first victory against England in over 40 years.

4. You thought the delays building Wembley were bad...

Delays in the demolition and subsequent construction of Wembley Stadium left the North London venue out of use for just over six years. Chorzów's Stadion Slaski is set to overtake that soon enough. The former home of the Polish national team saw its last game in late 2009, and with construction slowly grinding to a halt, it is unlikely to see action of any kind for another few years.

With a capacity of just over 47,000 (its expansion will take it to over 55,000), the Slaski was by far the largest football ground in the country. Despite being located around 300km from the capital and having hosted internationals since its construction in 1956, it officially became the home of the Polish side in 1993.

Nicknamed the Kocioł Czarownic or Witches' Cauldron, it was known for its intimidating atmosphere, helped in part by the region's coal mining industry creating an orange haze in the early evening sun. However, in the four years since the former national stadium last hosted a game, renovation has been besieged by problems which have put its future into question.

During the positioning of the roof support cables in 2011, a large steel attachment mechanism snapped under extreme tension, causing the evacuation of the stadium and its adjacent hotel. Since then construction has halted and designs changed, with one engineer going so far as to claim that failures in the old designs could have potentially cost thousands of lives.

Meanwhile, there are doubts as to what the stadium will actually be used for upon completion, with the national team now residing at the larger Stadion Narodowy in the capital Warsaw. PZPN President Zbigniew Boniek has suggested it may be offered as a possible venue for UEFA's magical mystery tour for the 2020 European Championship, or even share international duties.

But if any more problems are picked up there will be real worries it won't even be ready for that.

Warsaw (home of the Polish FA) and Chorzów (former home of the Polish national team) both have claims to be the home of Polish football, the country's first teams were established back in 1903 in the eastern city of Lwów. Then part of the Austro-Hungarian Empire, Czarni Lwów, Pogoń Lwów and Lechia Lwów all were established within a year of each other, and their early forays to play in Kraków are widely regarded as the catalyst for the beginnings of two of Poland's current biggest clubs; Wisła Kraków and Cracovia.

With the dissolution of the Empire, Lwów was amalgamated into the Polish republic, and it was here where the three clubs became founder member of the Polish FA (PZPN). Pogoń, the bigger of the three clubs, quickly became the most successful club in the country, winning four of the first five Polish Championships (1922, 1923, 1925, 1926). But with the outbreak of the Second World War in 1939, football in the country was suspended, and all three clubs were wiped from existence.

By the time the war ended, the Polish borders had swung dramatically westwards. While Poland had claimed the territory of Silesia from Germany, the south-eastern part of the country fell into Soviet control, with Lwów, the biggest city in the region, renamed as Lviv. The redrawing of the boundaries saw Poles forced from their homes in the east, many of whom moved to Silesia, which was now vacated by Germans. Here, former players and fans of Pogoń Lwów were responsible for creating new clubs – Polonia Bytom, Odra Opole and Pogoń Szczecin were just a handful of the new teams adopting the colours of their predecessors.

However, with the backing of Polish fans and sponsors, Pogoń Lwów were re-established in 2009 just a stone's throw away from their former stadium. They now ply their trade as an amateur club in the lower depths of Ukraine's football pyramid, and since re-forming have played numerous friendly games against Polish clubs including Cracovia and Korona Kielce.