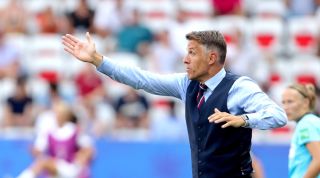 For the first time ever, England go into a tournament with that trophy already under their arms – though whether they will return home with it is another matter altogether. Beating Brazil, drawing with USA and hammering Japan was enough to see the Lionesses lift the SheBelieves Cup in Tampa last year, having thrived as the underdog among two World Cup-winning sides.

Twelve months on from that triumph and Phil Neville’s side are returning to American soil tasked with defending their crown – still their only one to date. With the ‘reigning champions’ title still somewhat of a novelty, questions are being asked about whether the pressure will weigh too heavily on Neville’s young side.

England must rediscover a winning habit if they are to prove their wretched run of form since being dumped out of the 2019 World Cup in France last summer was nothing more than a blip. The Lionesses won just twice (vs Portugal and the Czech Republic) in the seven games that followed the bruising semi-final defeat to USA in Lyon, leaving Neville clinging on to his job.

Though there’s been little talk of his all-but signed P45 of late – largely due to a three-month break from international fixtures – if England were to stutter their way through their 2020 SheBelieves campaign too, you can bet those conversations will promptly resurface.

But football has a habit of throwing up these narratives, this one seeing England begin their quest to regain their trophy and their reputation against old foes USA in their own backyard.

On more than one occasion during his two-year reign, Neville has insisted his side are aiming to overtake the four-time world champions, the most successful women’s national team in history. But if the Lionesses are to go anywhere near replicating the USWNT’s ruthless ‘us-against-the world mentality’ and topping up their trophy cabinet, they must start by making their mark in Orlando on Friday.

EXCLUSIVE Megan Rapinoe: "If the only thing I ever do in my life is be a successful soccer player, that sucks – sorry, that’s just not good enough for me"

The ability, belief and consistency to get over the line in big occasions has alluded the Lionesses thus far. Steph Houghton’s 84th minute penalty miss in the World Cup semi-final and England’s defeat to Germany in front of a record 77,768 crowd at Wembley in November are arguably both prime examples of that.

Even though the SheBelieves Cup is an invitational tournament, there is a lot more than just national pride at stake. The Lionesses must lick their World Cup wounds and come back in style if they are to be taken seriously on the international stage. Should they arrive at London Heathrow empty-handed in 12 days’ time it may prove difficult to shake off the ‘same old England’ tag that has long blighted their male counterparts.

After facing the USA at the Exploria Stadium – with kick-off at midnight on Friday morning – England travel north to the home of the New York Red Bulls in New Jersey on March 8, before ending their campaign on March 11 against Spain in Frisco, Texas.