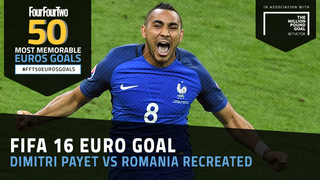 France are in serious contention to win Euro 2016, and they were helped on their way with that late 2-1 victory in their first game of the tournament. Romania put up a stern challenge coming back to 1-1 (through Bogdan Stancu's penalty) before Dimitri Payet struck late on to win the Group A encounter.

The West Ham man was impressive throughout but capped his display with a blockbuster shot into the top corner in the last few minutes of the game.

We've recreated the West Ham man's superb goal in FIFA 16 (thanks to the brilliant Bateson87). Pop back for more recreated goals soon.